Political Calculations
Unexpectedly Intriguing!
13 February 2006
What If the Death Tax Were an Income Tax?

It has often been said that two things in life are certain: death and taxes. In reality, there's a third certainty to go along with the first two: while people are alive, they'll attempt to avoid the taxes.

What brings this up is a recent paper by David Joulfaian on The Behavioral Response of Wealth Accumulation to Estate Taxation: Time Series Evidence, which is available online as a 562KB PDF document (HT: The Tax Foundation's Tax Policy Blog.)

Part of the paper's approach is very interesting - Joulfaian determines what the equivalent income tax would be if the estate tax were levied all through life, as opposed to just at the end. That kind of math is too interesting to pass up, and Political Calculations offers the following tool, which may be used to estimate what additional percentage of their income an individual would have to pay if the estate tax were levied this way.

The default data in the table below is for a 21 year old man (with a 54.6 year remaining life expectancy), who will earn a 10% nominal rate of return on his assets, and who may expect to have his estate taxed at the 55% estate tax rate.

Looking at the estate tax in this way, is it any wonder that so many people (particularly the very wealthy) invest so much time and energy in life to avoid having to pay estate taxes? The increased equivalent income tax imposed by the estate tax is driven home in the following chart, taken from Joulfaian's paper, which illustrates the effective income tax rate for a variety of different investment rates of return and age: 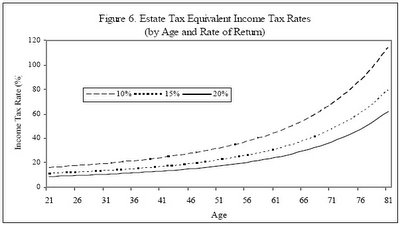 Joulfraian estimates that if not for tax avoidance strategies, the taxable amount of estates subject to the tax would be 14 to 27% greater.

What's really amazing though is how little money (as a percentage of total tax receipts) that the U.S. government collects in estate and gift taxes. The following image shows the relative amounts of the various kinds of taxes levied by the U.S. government on the left (HT: The Big Picture): 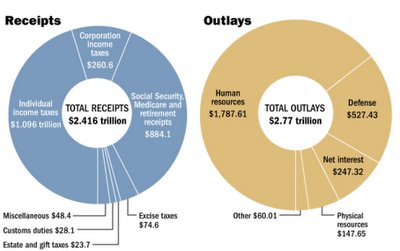 The $23.7 billion USD of estate taxes that Uncle Sam will collect in 2007 amounts to less than 1% (0.98%) of the anticipated $2.416 trillion USD total of all tax revenues, which makes one wonder why the government should even bother imposing the tax at all? What would happen?

In the conclusion to his paper, Joulfaian finds that: "in the absence of the estate tax, there will be no longer a need to engage in estate planning and employ strategies designed to reduce the reported value of assets." When you consider how successful those facing the estate tax are at avoiding it, and how little it means to the financial well being of the nation, it would seem wise to encourage these individuals to pursue more productive uses of their time by eliminating the death tax altogether.