Shortly after posting yesterday's analysis of AAR's ratings, I received an e-mail that made a very good point regarding the full magnitude of the impact that Air America Radio (AAR) would face if it loses it's flagship WLIB affiliate in New York City. In short, the station has a powerful enough signal to reach a number of other radio markets in the northeast, which significantly adds to the number of Age 12+ listeners for AAR's programming via WLIB itself.

The following short table shows all the markets for which AAR's broadcasting through its current WLIB affiliate has registered measurable ratings:

Together, the other markets in which AAR's signal is heard represent an additional 32,606 Age 12+ listeners, bringing the estimated total of AAR's audience on WLIB to 224,256. This also brings AAR's estimated total audience in the U.S.' Top 100 Radio Markets to 1,024,914 listeners per average quarter hour.

WLIB's share of Air America Radio's total estimated audience per average quarter hour in the U.S.' Top 100 radio markets is therefore increased to 21.9%. The following chart illustrates WLIB's proportional share of AAR's audience in these regions, along with the next four stations with the biggest audiences for AAR's programming: 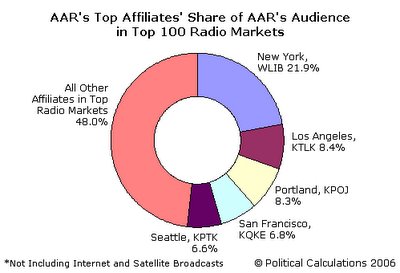 We also note that our previous point about the importance of the New York City radio market ot AAR remains valid. Assuming that WLIB generates 22% of AAR's revenue from its operations, the loss of this affiliate without corresponding reductions in the network's cost of operations would significantly increase its financial strain, making it all but certain that significant cost cutting would ensue as the network struggles to survive.