If you could locate your new business anywhere in the world, where would you build it?

The study is an expansion and update of previous KPMG publications, and measures the combined impact of 27 significant business cost components that are most likely to vary by location. The study covers 17 industry operations in nine industrialized countries: Canada, France, Germany, Italy, Japan, the Netherlands, Singapore, the United Kingdom and the United States.

The basis for comparison is the after-tax cost of startup and operations, over 10 years.

Overall, what the study found is summarized in the following chart, which details the total annual cost comparison for the nations included in the study: 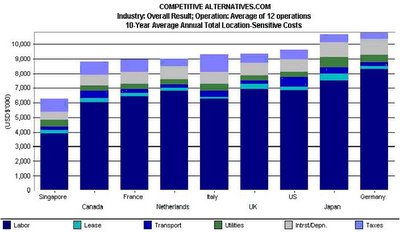 In reading the chart, we find that Singapore has, by far, the lowest costs for launching and operating a new business through its first ten years. The nations of Canada, France, the Netherlands, Italy, the UK and the US are all closely competitive in location-sensitive costs with one another, while Japan and Germany are substantially more expensive than the rest.

In other words, if the total cost of launching and operating a new business for ten years were the key driving factor in selecting the location of a business, in 2005, Singapore would win, hands down.

The decision of where to locate a business' operations is substantially more complicated, as total cost becomes just one of many considerations. Highly influential, but non-cost related factors include: location of major customers and competitors, location demographics, available infrastructure, etc.

Who might have guessed that the U.S. would have the third-highest costs of the world's major economies?