One of the neatest resources for tracking the rise in value of such resources as copper, nickel and zinc that I've encountered is the Coinflation web site. The premise of the site is very straightforward - Coinflation determines the current value of the metals that go into U.S. coins and compares it to the coin's face value. The following screen shot illustrates the relative values of metal to face value as of 3 April 2006 for U.S. coins presently in wide circulation: 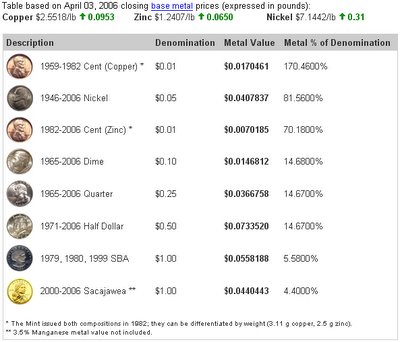 Meanwhile, the metal content of that nickel we mentioned earlier will reach a value of $0.05 per coin if the market price of nickel increases to $8.757 per pound.

Coin collectors would do well to stock up on the 1959-1982 U.S. penny - at these prices, it's just a matter of time before the coins start disappearing from circulation as the demand for copper will make it worth the effort to collect and melt down the coins for their base metals.