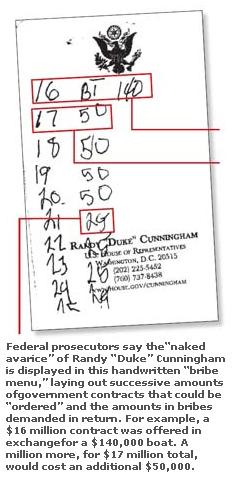 On March 3, 2006, U.S. Congressman Randy "Duke" Cunningham (R-CA) was sentenced to eight years and four months in federal prison months after pleading guilty to charges that he had accepted bribes from defense contractors Brent Wilkes of ADCS Inc. and Mitchell Wade of MzM Inc. Cunningham had previously resigned from Congress on November 28, 2005 after pleading guilty to the crimes.

What makes the case really interesting is that Cunningham created a price sheet that outlined what benefits could be obtained for bribes of certain values (see image). The San Diego Union-Tribune outlines the details:

The prosecutors' papers listed previously untold details of Cunningham's crimes, including a “bribe menu” found on Cunningham's boat that detailed in his own writing how much it would cost Pentagon contractors for each million dollars in business steered their way.

The menu offered a $16 million contract in exchange for a $140,000 yacht. The bribes then grew by $50,000 for every $1 million in additional funding, according to the list, which included a volume discount as the contracts grew.

The volume discount aspect of the bribery scandal is what I find most fascinating - what on earth could explain why Cunningham was willing to reduce his take in return for providing millions and millions more in contracts with his co-conspirators? So far, I've been able to come up with the following hypotheses:

Recent events suggest that the third hypothesis of Competition provides the best explanation, as the circumstances surrounding the alleged corruption of Representative William Jefferson, D-LA, and Representative Alan Mollohan, D-WV are just now coming to light. Who knows what other "bribe menus" there might be floating around the halls of Congress?