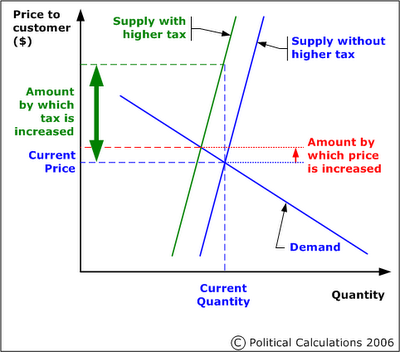 For those who missed Econ 101, note that in the diagram above, the consumer's demand didn't change. This is very true for products like oil and gasoline in the short-to-medium run (in the long run, people have time to adapt and find substitutes or become more efficient.) What did happen is that as the tax increase was imposed, it immediately reduced the ability of consumers to purchase the same quantity of the item being supplied as before. As a result, the available supply of the item will decrease to meet the artificially reduced demand.

Alternatively, the consumer could continue to purchase the same quantity as before, but must purchase lesser quantities of other items. That has negative consequences for other economic activity.

In the case of the windfall profit taxes discussed in Betsy's post, the effect is that the supply of oil in the market not only decreases, but also that the money that could otherwise have been used by the oil companies to expand production or to create incentives for future investment in the companies' productive capacity is instead routed to fund projects supported by a handful of special interest groups with strong political connections.

For that matter, we're talking about the same special interest groups who cannot convince enough consumers that their projects are worth investing in directly - projects like building large stadiums, installing art on public property, passenger railroad service or constructing highways and bridges to nowhere.

At worse, increased taxes not only reduce the supply of the item being taxed, but also results in less productive economic activity that results in less tax revenue which hinders the politicians' ability to reward their supportive special interest groups. Because the politicians are not looking out for consumers (read: everybody), they hike the taxes again to replace what they see as their "lost" revenue. And the cycle repeats ad nauseum (see Zimbabwe for a current example of what happens when taken to the full extreme.)