Political Calculations
Unexpectedly Intriguing!
21 June 2006
Beer Caps. Is There Anything They Can't Do? 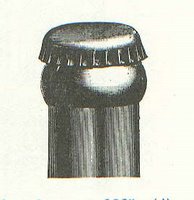 With apologies to Homer Simpson, we came across this fun tidbit (via PSD Blog):

Beer caps represent a case study in good design - they're attractive, light weight, inexpensive, fun and far more functional than the original designer(s) would ever have expected. So functional, in fact, that we thought it might be useful list a handful of the applications, other than the new agricultural one above, to which we've found this marvelous device put to use: