This past weekend, on Meet the Press with Tim Russert, Congressman John Murtha (D-PA, former USMC Colonel) called for the redeployment of U.S. troops from Iraq, citing several nations in the region where they might be based. Then, in a stunning display of his military acumen, he suggested that the Japanese island of Okinawa in the East China Sea might be an ideal spot from which to base troops and aircraft to provide a "timely" response to events on the ground in the Middle East.

MR. RUSSERT: But it’d be tough to have a timely response from Okinawa.

REP. MURTHA: Well, it—you know, they—when I say Okinawa, I, I’m saying troops in Okinawa. When I say a timely response, you know, our fighters can fly from Okinawa very quickly. And—and—when they don’t know we’re coming. There’s no question about it. And, and where those airplanes won’t—came from I can’t tell you, but, but I’ll tell you one thing, it doesn’t take very long for them to get in with cruise missiles or with, with fighter aircraft or, or attack aircraft, it doesn’t take any time at all. So we, we have done—this one particular operation, to say that that couldn’t have done, done—it was done from the outside, for heaven’s sakes.

Perhaps the best way to examine the issue of Murtha's idea of a timely response in launching an air strike is to consider the recent air mission that targeted and killed Al Qaeda's "prince" in Iraq, Abu Musab al-Zarqawi. Here, two F-16 fighter jets dropped two 500-lb bombs on Zarqawi's location north of Baghdad after intelligence confirmed his presence.

The U.S. 10th Air Force reports that an F-16 conducting an air-to-ground strike mission may "fly more than 500 miles, deliver its weapons with superior accuracy, defend itself against enemy aircraft, and return to its starting point." The map to the right illustrates this 500 mile combat radius, centered on the island of Okinawa. (See a larger version.)

Notice how the Middle East isn't anywhere within that 500 mile radius?

Our next map, which we generated courtesy of the Great Circle Mapper shows the shortest route from Okinawa (OKA) to the Baghdad International Airport (SDA): 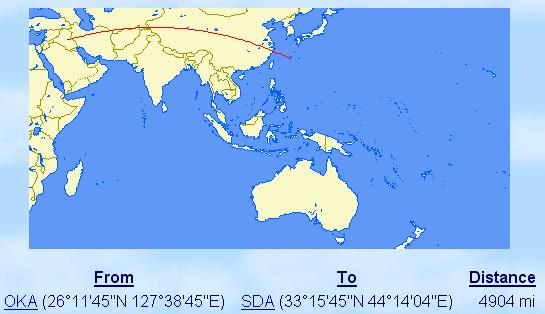 The shortest route around the globe from Okinawa to Baghdad is 4,904 miles, nearly 10 times further than the F-16's effective combat radius. Also note that conducting such a mission from Okinawa would require the coordination, cooperation and permission of the nations of Japan, China, Afghanistan, Russia, Iran and Iraq! And who knows how long it would take the U.S. State Department to secure their permission?!

Of course, the U.S. might consider flying a route that would not pass through the airspace of these or other nations, but at the cost of severely extending the time and distance the aircraft would have to fly. Compared to operating from bases in Iraq, it's no contest which option offers greater advantages.

If nothing else, I think we can see now why Representative Murtha never achieved the rank of General in the U.S. Marine Corps....