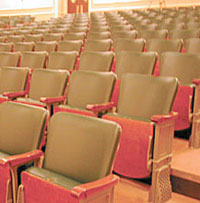 On June 7, 2006, the great state of Florida made it possible to better match the supply of tickets and the demand consumers of entertainment events by removing the state's penalties for ticket reselling (a.k.a. "ticket scalping"):

Bad news for Miami Heat fans with tickets to the championship games they want to sell for big bucks: The bill doesn't take effect until July 1, long after the end of the NBA Finals.

Under the measure, Florida's 60-year-old ticket scalping law, which forbids selling tickets for more than $1 above the face value, will be eliminated and in its place will be an open-market system that will allows ticket owners and Internet brokers to sell tickets at whatever price the buyer agrees to pay.

Economist Greg Mankiw reviewed an editorial advocating against the passage of the bill, in which a concert promoter argued that the bill was "'ridiculous' because it only 'makes more money for scalpers,'" leading Mankiw to ask three questions, upon which we'll speculate:

1. Why would someone who makes a living putting on concerts object when ticket resellers get their products into the hands of buyers with the greatest willingness to pay?

In two words: seller's remorse. This phenomenon is something that happens often in the world of real estate and represents, in the words of Coldwell-Banker, "a stupendously strong conviction on your part that you're about to sell your house for less than it's really worth. When you're in the cruel grip of seller's remorse, facts take a back seat to perceptions."

Here, the significantly higher price obtained by a ticket reseller would represent a significant "perceived" opportunity cost to the promoter who feels that they could have earned a higher profit. This sentiment ignores the promoter's own risk, or rather, does not fully recognize it. For example, what if the promoter couldn't sell all the available tickets to fill the concert venue? How many tickets would they have to sell to guarantee they would cover their business costs and at least break-even?

2. Why do concert promoters often price tickets well below the equilibrium price in the first place?

A. Profitability. Here, the promoter has adopted a pricing structure that reduces their risk of not being able to at least break-even on an event or series of events. The trade-off for guaranteeing this level of profitability with this reduction is risk is that the promoter sacrifices the potential to earn much higher profits.

B. Marketing. By setting the price for tickets below the market's equilibrium price, the promoter is able to bring out more potential customers than they would if they charged a higher price. This higher level of demand may be exploited by the promoter who might realize greater profits in a number of ways, such as adding additional performances of the event, which has the benefit of providing little additional cost for substantial benefits, or by reducing the risk of promoting other events by selling tickets to otherwise "disappointed" customers for these substitutes.

It also has the effect of creating "buzz" among potential customers, who upon seeing "apparently" high demand for an event would have the perception that the tickets are highly desirable. We should also add that this "buzz" has the side-effect of fueling the resale market for the event's tickets!

3. If a concert promoter like Mr Stoll sold tickets with a "not for resale above face value" clause, should the government prohibit scalping as part of its duty to enforce private contracts?

Interesting, and I should add, addressed in the comments of Mankiw's original post in far greater depth than we could cover here. Well worth reading!