Political Calculations
Unexpectedly Intriguing!
29 June 2006
What the Fed Will Do or Did Today

First up, what the Fed might do today! Barry Ritholtz asks:

I simply don't know how all this 50 basis point chatter got started and pinged around Wal Street like its a likely option.

If we go by the recession prediction model published by the Fed earlier this year, the current spread between the 10-Year (5.21%) and 3-Month (4.85%) Treasuries, increasing the Federal Funds Rate (FFR) to 5.25% will keep the probability of recession occurring in the next 12 months at 27%. (Do the math yourself here.) That would be certainly be fully consistent with the level of recession probability for the last 3 Fed hikes.

But, this time around, the Fed has more room to maneuver since the spread between the 10-Year and 3-Month Treasuries has been widening. If they increase the FFR to 5.5%, the odds of recession increase to just 30% - not that much different and, in fact, well within the range the recession probability level has been bouncing around in over recent weeks. This would allow them to get more of a jump on inflation with less risk to the economy, allowing them potentially more flexibility with adjusting rates later in the current cycle.

At 100 basis points however (a full percent increase in the FFR to 6.0%), the probability of recession in the next 12 months jumps to 37% - a sharp increase that would very likely spook the markets, making such an increase unlikely in my view.

The Fed opted to continue along the 27% recession probability line by only increasing the Federal Funds Rate to 5.25%. The chart below illustrates this latest move in the Fed's most recent tightening cycle: 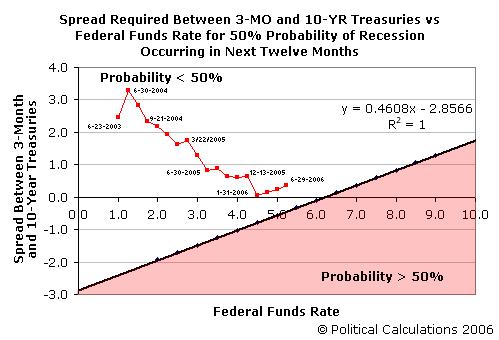 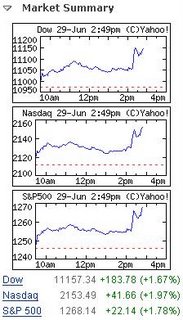 For this Federal Funds Rate, the U.S. Treasury yield curve would have to invert by more than 44 basis points (.44%) between the 3-Month and 10-Year treasuries in order to reach the 50% probability threshold for a recession occurring in the next 12 months!

Update (2:49 PM EDT): And just for fun, can you pick out when the Fed made their announcement for the new Federal Funds Rate on the charts at the right?

Update (3:00 PM EDT): Well, it appears that the probability of recession may be dipping slightly - at this writing, the 3-Month Treasury is yielding 4.68% and the 10-Year Treasury is yielding 5.15%. With the new Federal Funds Rate of 5.25%, that would put the probability of recession at 24.5%! I'll be updating the chart above after the market closes for the day....