Earlier this week, the New York Times announced that it would be shrinking the size of its pages to save money. Oh, and its staff too. Again.

By our count, we find that the New York Times has laid off some 1109 employees in the six years since the beginning of the century, a little over 8% of the total number of its employees in 2000.

Of course, the real question has nothing to do with how many hard-working people the New York Times will slash from its payroll. Oh, no. The real question is: How will the same business conditions that have led to the ongoing shrinkage (in workforce, and now literally) of the New York Times affect publisher Arthur "Pinch" Sulzberger's annual bonus?

What makes this question relevant is how the New York Times' Board of Directors acted just last year, as the Times' management team, led by Sulzberger, moved to reduce its staff by 500 people as a permanent cost savings measure. Despite the newspaper's stagnant business condition, which apparently required the ouster of 4% of its staff, they awarded him a substantial bonus of $560,521 in cash and granted him restricted stock units worth $817,500 - on top of his $1,055,596 annual salary for a grand total of $2,433,617 in total financial compensation.

But, let's put the situation at the New York Times differently - we'll compare the newspaper's business condition (represented by its stock price) with Sulzberger's compensation in the chart below: 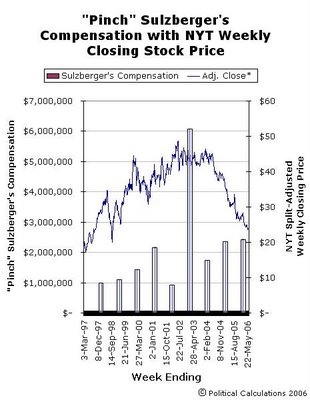 Is Pinch in for a pay cut this year? Draw your own conclusions, but consider the following two questions and answers....

Why was Pinch's pay so low in 2001? We've listed Sulzberger's compensation in the chart above as occurring when the New York Times annual report for the previous year's business was released - in this case, in March 2001. Here, Pinch's low pay level is the result of the New York Times' falling advertising revenues throughout 2000, which led, in good part, to the paper's layoffs later in 2001. Sulzberger did not receive a bonus for that year, which accounts for its "low" level compared to other years.

Why did Pinch get such a huge spike in compensation in 2002? It might have something to do with what the New York Times called the largest circulation gains it experienced in over 10 years, which also coincided with the papers Pulitzer-prize winning coverage of the terrorist attacks on the U.S. on September 11, 2001 (it won seven Pulitzers - its most ever in a single year.)

The paper's performance since then, reflected in its recently announced cost reduction measures, suggests that Sulzberger's compensation in 2002 was grossly excessive as the New York Times has moved away from the balanced coverage of stories of both great national and local interest.

Because of that factor, it's difficult to see a responsible board of directors approving any bonus for the newspaper's management team in the upcoming year. It may all be a moot point however since Sulzberger's family controls the company's board and can set whatever minimal and arbitrary performance requirements it desires in setting its compensation policies for executive bonuses.