Political Calculations
Unexpectedly Intriguing!
10 August 2006
How Much Gas Do Americans Use?

The question seems obvious given all the news coverage related to the price of oil and the geopolitics related to its supply, not to mention the seemingly endless whining about SUVs on the roads of the United States from environmentalists, but really, how much gasoline is supplied to the average American, and how has that changed over time? Are individual Americans consuming more or less gas than they did in years past?

To find out, we first tapped the information available at the U.S. Energy Information Agency, which provided a nifty table showing the thousands of barrels of finished motor gasoline supplied to gas stations across the U.S. from 1945 through 2005. 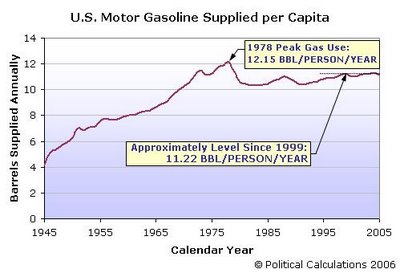