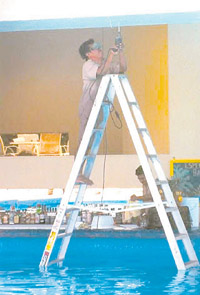 Every now and again, we here at Political Calculations are inspired to provide a public service to the community at large. Well, maybe not "inspired" so much as "court-ordered", so with that in mind, we present the following safety tips provided by the Home Safety Council on how you can avoid accidents with ladders.

Why our interest in ladder safety? Well, frankly, the ladder is a device where the intersection between common people and common sense becomes truly disconnected, as the portions we've emphasized below make clear:

On that last point, one wonders why ladder manufacturers don't just make ladders with only the rungs you can stand upon, but that's neither here nor there, as we have two final ladder safety points to make. Both points should be considered common sense, but sadly, are not. The first relates to the picture at the top of this post, and the moral of the story presented in this picture is simply: Never, never, ever put your metal ladder in your pool as a platform for doing any sort of industrial work requiring electrical equipment.

The second is more obscure, and far less likely to happen than our first point, but should be common sense all the same. Never, never, ever get into a ladder fight with Jackie Chan: 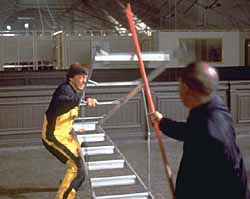