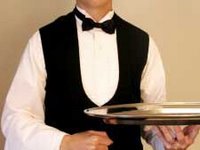 What are the occupations of the lowest paid people in the U.S.? And how much do they make? We here at Political Calculations not only ask questions like these, we take time out of our busy days to answer them too!

Our go-to source for finding out what industries or occupations represent the low end of the U.S. totem pole turned out to be the Congressional Budget Office, which published a study of the lowest-wage workers in the U.S. from 1979 through 2005 (available in this December 2006 report.) The report indicates that just six general fields account for more than half the employment of the lowest paid 20% of the U.S. workforce: 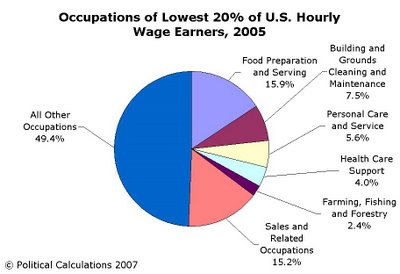 Now, let's find out what the actual lowest paying jobs are! The following table is taken from BizJournals.com's analysis of full-time private sector worker salaries in 2004. Since several of these occupations supplement their basic pay by collecting income from tips, an asterisk (*) has been added to indicate those occupations where substantial tip income has not been included. We've added the column for the Equivalent Hourly Rate, which we found by taking each occupations' average annual earnings for 2004 and dividing by 2080 hours (the equivalent of 40 hours per week, 52 weeks per year):

We should note that these figures only apply to full-time workers. As we've previously reported, the vast majority of low hourly wage jobs in the U.S. are part-time positions, particularly those at the federal minimum wage.