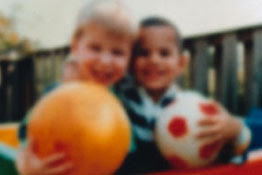 Ready for a quiz? Let's get right to it:

A retired elderly woman in very good health lives in a developed country in which all health care services for individuals are provided for by the national government. She has cataracts in both her eyes, with one somewhat more advanced than the other. She is scheduled for a surgical procedure to correct the condition. Which of the following do you believe will happen?

The correct answer, at least for now, is B. The reason stated by the health care professionals in the country in question is that B best describes the patient's medical necessity for the procedure. The real question is why is the correct answer not A? Consider the following:

Given these circumstances, what possible reason would any medical professional have in determining that the surgical procedure should only be limited to just one eye?

The answer: "medical necessity" has likely been defined down to accommodate available funding for the procedure. Not because the procedure isn't needed, but because some government bureaucrat somewhere has made a determination that only "X" amount of money will be spent on health care this month, which means that costs have to be controlled to fit the available budget. And perhaps the only reason the answer isn't C or D is because it's been a good month for the health care bureaucrats.

Because everybody in this country is served by this single payer system for health care, that means that choices are going to be made like this to ration the amount of health care provided to individuals. In this case, that means delaying a needed procedure by months just for the sake of saving a small amount of money today in favor of spending substantially more later to accomplish the same task. So much for achieving a high quality, low cost system of national health care.

At least, that's what the politicians guaranteed that they would deliver. Good thing that the definition of what constitutes medical necessity is apparently up to the same people, otherwise it's possible that they never would!