Has it been six weeks already? Well, that means we've got another FOMC rate announcement to consider!

Using our tool for reckoning the odds of recession, we find that the 1-quarter rolling averages for the ongoing Federal Funds Rate (5.25%) and the spread between the 3-month and 10-year Constant Maturity Treasuries gives the probability of recession beginning sometime in the next twelve months at 49.7%, having increased from 48.9% when we last considered it on March 1.

Meanwhile, using the daily discounted Treasury yield curve data (used to create the line on the chart below), which the tool points to as a fairly good, if somewhat volatile proxy for the 1-quarter averaged data, we find the probability has declined from it's March 1 level of 50.1% to today's 44.9%. This sharp move follows the bond market's positive reaction to the Federal Reserve's statement in which they indicated they were no longer inclined to consider further tightening of interest rates. 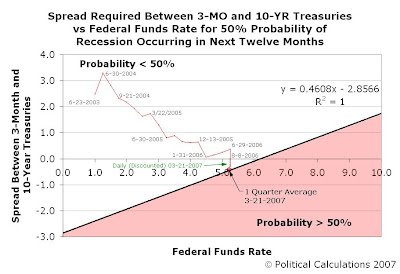 What does all this mean? If we accept the discounted daily Treasury yield data as the best snapshot of the bond market's take on recession risks today, we can expect that there will be no recession in the next 12 months.

By contrast, the rolling one-quarter average for the daily values of the Constant Maturity U.S. Treasuries is likely to continue increasing for a time, and will exceed the 50% probability level in the very near future. At present, trends suggest that the probability of recession using the method developed by Jonathan Wright will continue to move upward to float somewhere in the 50-52% range.

As always, time will tell, but at this point, we're not prepared to predict that a recession will begin in the U.S. sometime in the next twelve months. (For more on what we would need to see to make that call, see our thoughts here!)