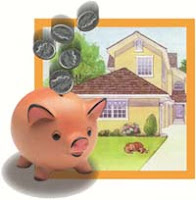 What accounts for the number of Realtors® in the United States?

We found ourselves asking the question after looking at data on the number of Realtors® provided by the National Association of Realtors® (and before we go any further, yes, we're trying to avoid tripping over the NAR's registered trademarks, which accounts for the abundance of ®'s in this post!) What we saw in looking at the NAR's annual member count didn't match up with what we would have expected: there was very little correlation with the health of the U.S. economy and the number of Realtors®.

That something else would appear to be technology. We found the smoking gun, so to speak, in the summary of the NAR's history, which identified 1975 as the year in which the NAR's Multiple Listing Service (MLS) was computerized. In just that year alone, the number of Realtors® more than tripled from 134,362 at the end of 1974 to 435,485 at the end of 1975.

That growth continued until 1980 when the Federal Reserve's exceptionally high interest rates put the brakes on the U.S. economy and triggered a recession. From there, the number of Realtors® stayed relatively constant until 2001, when the numbers surged again from 803,803 to 1,357,732 at the end of 2006, the most recently available number.

This time, the surge in the number of Realtors® corresponds with a period of historically low interest rates (not seen since the 1960s), but again, a time that follows the NAR's implementation of modern database and Internet technologies. 2001 in particular is significant in that the Realtor.org web site was launched, providing much easier access for the group's members to it's proprietary information and services.

Our chart below illustrates the role of technology in expanding the number of Realtors®: 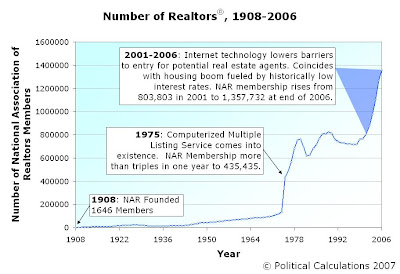 Our working theory is that technological innovation, first in the form of the computerized MLS and later through improved access to information through computerized database and Internet technologies, lowered the barriers and costs of entry to larger numbers of real estate agents, above and beyond what would be expected if only the health of the U.S. housing market and economy is taken into consideration. The improvements in technology have produced this result by making information easier to enter and access, reducing the amount of time needed for agents to become skilled in using the systems and also to conduct transactions.

What will be interesting to see is if the democratization of access to housing information away from sources operated by the NAR to such outlets as Zillow and Google will ultimately reduce the number of Realtors® over time, as new technologies make it less necessary to become a member of the National Association of Realtors® to have access to the same information.