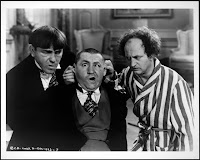 We were rather taken with John Mauldin's March 30, 2007 Thoughts from the Frontline, in which he described some of the machinations now going on concerning U.S. trade with China in the U.S. Senate. The phrase "economic idiots of the first order" is a fit description for the three U.S. Senators pushing a protectionist agenda (grammar notation and emphasis ours):

There is only one thing which really gives me reason for concern that the US will not continue on a reasonable growth trajectory, with a few bumps here and there. That is the growing mood in Congress for passing trade protection legislation that could start a series of retaliatory actions around the world that could result in a trade war, a la Smoot Hawley in the 1930s.

Stephen Roach, Chief Economist at Morgan Stanley, writes a rather chilling description of his recent testimony before the Senate Finance committee. He noted that as he entered the room, he looked up and saw a picture of Senator Reed Smoot on the walls, as Smoot was a former chair of the committee and the co-sponsor of the Smoot-Hawley Tariff Act of 1930, largely responsible for the Great Depression.

At the hearing, it was clear that a bi-partisan effort is getting ready to pass legislation that would punish China for the large trade deficit we have with that nation.

Democratic Senators Schumer and Baucus and Republican Senators Graham [and Schumer (sic)] are looking for ways to try and force China to allow the dollar to fall against their currency. They think this would decrease the trade deficit and keep more jobs in the US. They are economic idiots of the first order. But they are smart politicians, which is dangerous.

They know that passing a tariff increase would not be compliant with World Trade Organization rules that the Senate agreed to, so they are working on a way to create a WTO compliant back door.

First, does anyone really think that by increasing dollar costs for labor in China that manufacturing would not go elsewhere? My socks were made in Turkey (which surprised me) and not in Asia. Are we going to pass legislation that would drop the dollar against all currencies? Does Congress really think they can control the price of a currency for any length of time?

The problem is not just in China. The US plays its part by not saving enough and running deficits. As long as the US does not save, we are going to run trade deficits. It is a basic law of economics. If it is not with China, then it will be with someone else.

You have to be careful what you wish for. If (and when) the US consumer saves more, it will naturally be at the cost of increased consumer spending. That would mean a slower US economy.

After looking at the level of U.S. dollar-Chinese Yuan exchange rate from May 2006 to March 2007, which has seen the dollar-yuan ratio change from 1:8.02 to 1:7.73 (the U.S. dollar has declined in relative value by a total of 3.6%), and examining the impact of higher prices through protectionist-driven inflation on those with low incomes, Mauldin goes on to consider other ramifications of the Senators proposed protectionist tariff:

Second, what message does that send to the world? Protectionism is ok? Free trade does not work? Let's see if we can start a round of protectionist trade wars, with each country responding tit for tat. Let's kill the engine for global economic growth.

Do the Senators deliberately want to create problems in China by a precipitous change in our trade relations which will have a major affect on world commerce?

For our part in answering this latter question, let's simply examine the trade between the U.S. and China. We'll consider the time it takes for the value of trade in either direction to sustainably double. By "sustainable doubling time," we mean the time it takes for the trade to fully double from a previous period, without dropping lower than that doubled level in a later period.

In our first chart below, using data related to the foreign-trade balance between the two nations recorded by the U.S. Census, we find that the growth of what the U.S. imports from China has grown substantially since January 1985, the earliest date for which the Census Bureau provides this data: 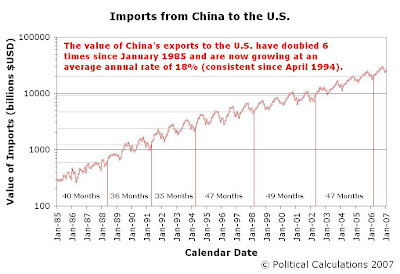 The logarithmic vertical scale may throw some off, but the growth of imports from China to the U.S. has grown exponentially in the recorded period, rising from 293.1 billion USD in January 1985 to 25,635 billion USD (or 25.6 trillion USD!) through January 2007.

Looking at the rates at which the value of trade doubles, we find that the doubling period is fairly consistent at approximately every four years, which equates to an annualized compound growth rate of 18%. This actually marks a deceleration from the period from January 1985 through February 1994, when the value of imports to the U.S. from China doubled roughly every 38 months.

Now, let's take a look at the value of U.S. exports to China over this same period, using a similar chart: 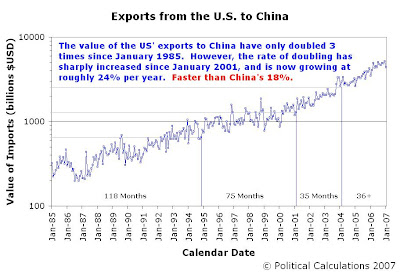 Quite a bit different. Here, we find that the value of what the U.S. exports to China has only fully doubled in value 3 times since January 2007, rising from 319.2 billion USD in Janaury 1995 to 4,364 billion USD (4.3 trillion USD) in January 2007. What's really remarkable is the acceleration of the doubling rate clearly visible over the period from January 1985 through January 2007.

And from January 2001 onward, we find that the value of all that the U.S. exports to China doubled again, in less than 3 years. That corresponds to an annualized compound growth rate greater than 24%. More significantly, since that last doubling period ended, we find that the U.S. has nearly doubled in the 36 months since, suggesting that the current rate of export growth has continued near this high level.

Even more remarkably, the current U.S. rate of export to China is higher than the Chinese rate of export to the U.S. As long as this trend is not interfered with by protectionist and other subsequent retaliatory anti-trade actions, the U.S. trade deficit with China will begin to close without any intervention by the three U.S. senators.

We'd call them protectionist stooges for the (fill-in-the-blank) special interest group, but that would insult the memory of Larry, Moe and Curly, who were anything but....