Political Calculations
Unexpectedly Intriguing!
May 8, 2007
Income Distribution Percentages by Age in the U.S.

Just to underscore the effect of age (or rather, the combination of education, experience and work status) upon individual income in the U.S., we came up with the following chart that shows how income within a given range is distributed among individuals within a given age range on a percentagewise basis: 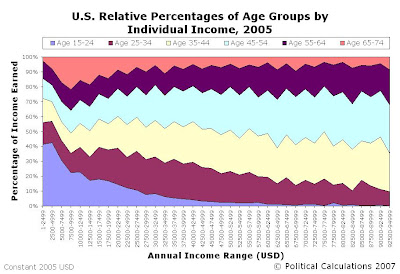 At the low end of the income scale, we find that those Age 15-24 make up the largest share, followed by those Age 65-74. This may be explained by those in the Age 15-24 group largely participating in educational pursuits (high school, college) and their low levels of experience and training for those participating in the workforce. For those in the Age 65-74 bracket, retirement accounts for the relatively higher level of low income among this age group.

As income increases, we find that as age increases, so does the relative share of income earned. In other words, the older the American, the more money they make, at least through their prime working years from Age 25-64!