We may be on to something. After the Climbing Limo method for forecasting GDP came in way off target for the fourth quarter of 2006 (see inset), we modified the method so that it would incorporate more up-to-date information about the state of U.S. economic growth.

We did this by bridging the most recent actual GDP result with the value forecast by the Climbing Limo method some three quarters out. The following chart shows how this worked with the just finalized GDP data for the first quarter of 2007: 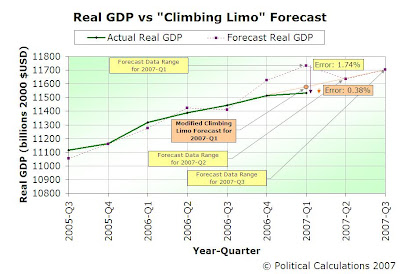 Our next chart shows the values projected by both the original Climbing Limo method and the Modified Limo for the second quarter of 2007: 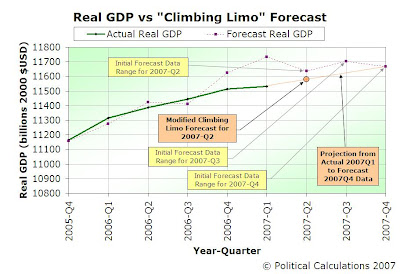 The original Climbing Limo method projected a real GDP level for the U.S. economy of 11,636.8 billion USD, while the Modified Limo projects that real GDP will come in at 11,577.9 billion USD in 2007Q2.

Worth reading: Steve Conover's and Brian Wesbury's takes on the future of the U.S. economy.

Update: How embarrassing! We accidentally placed the original two images illustrating the modified Climbing Limo method of forecasting real GDP in place of the two that we intended! The correct versions are now in place....