Once again, the Federal Reserve's Federal Open Market Committee (FOMC) has left the federal funds rate target unchanged at 5.25%. But, in the six weeks since the last time the FOMC left the interest rate it charges banks for overnight loans unchanged, and a highly visible part of it not for the better.

That highly visible part is represented by the home lending industry, as mortgagers have become increasingly more distressed over the state of their loan portfolios, particularly those that specialized in making subprime loans in recent years. Liquidity short lenders like American Home Mortgage (AHM) have begun filing for bankruptcy protection.

And that's believed to have largely driven the re-flattening of the U.S. Treasury yield curve, which had only recently gone back to sloping upward after being flat or negative for roughly the preceding 10 months. So you would expect that means that the risk of recession occurring in the U.S. in the next 12 months has increased, right?

Actually, the risk of recession has both gone up and down since the last FOMC meeting. Our chart below shows where we're at as of the latest FOMC meeting: 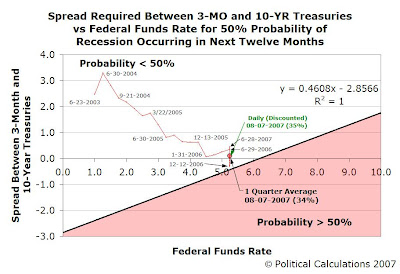 Going by the 1-quarter moving averages of the Federal Funds Rate and the spread between the 3-Month and 10-Year Treasuries, which is the method developed by Jonathan Wright, we find the current probability of recession occurring in the next 12 months to be 33.8%, down from the reading of 38.1% that we found on 28 June 2007. As a moving average, this probability is still following the downward trend that was established several weeks ago.

Using the daily discounted yield data of 4.74% for the 3-Month Treasury and 4.79% for the 10-Year Treasury with the 5.25 target Federal Funds Rate in our recession forecasting tool, we calculate the probability of recession to be 35.6%, up from the low of 25% that we found back in June 2007. As a daily snapshot that anticipates the direction of the moving average, this figure suggests that the downward trend of the 1-quarter probability moving average will be slowing and possibly reversing its descent.

By and large, not a big change in the risk of recession, but still a change in direction.