With the stock marketing taking a beating lately since hitting an all-time high, we thought it might be fun to look at the worst bear markets of all time, or at least since January 1871, which is as far back as our data for the S&P 500 stock market index goes! 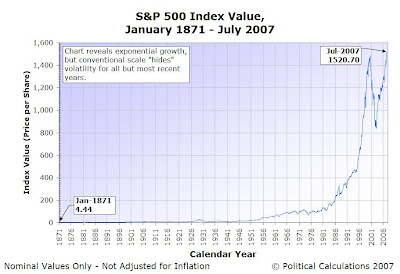 Well, that wasn't very useful at all, was it? We see one huge point drop between August 2000 and February 2003, another smaller one at August 1987 and everything else pretty much pales by comparison. So much for the big stock market crash of 1929 and the whole Great Depression having any real meaning, right?

Sharp-eyed observers will already have recognized that the value of the stock market has grown exponentially over time. Since we plotted our chart on a standard graph, it looks a lot like a hockey stick, except for the most recent years.

If we're going to do the job right, we'll need to re-plot our graph using a logarithmic scale for the index price. We've done this below, and we've ranked the five worst price drops that coincide with the worst bear markets of all time: 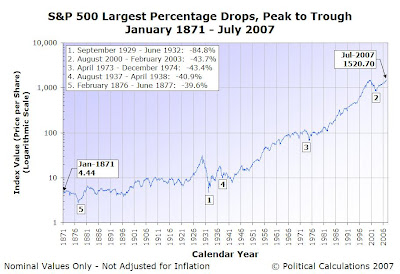 Now, we've got something! Using the logarithmic scale lets us see the true magnitude of the great bear markets for U.S. stocks since 1871. Our table below provides the data for each:

For what it's worth, we suspect that we still have a long way to go before we'll be able to see if the current stock market turmoil will create a bear market anywhere near as bad as these, as we've barely moved off the record highs.