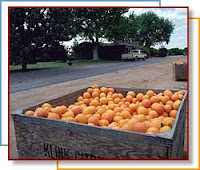 Presidential candidate wife Elizabeth Edwards apparently loves tangerines, but fears the destruction of the environment that comes from bringing them from where they're grown to her home. Because of that fear, she claims to have given up tangerines and instead will only buy locally grown produce.

The only problem we see with that is that the Edwards' continuing rape of the Earth will only be greater as a result.

We've previously dealt with some of the really dumb things environmentalists demand of others on a number of occasions, and we've even dealt specifically with this one, as the demand to "Buy Local" was included in a list of 10 things "you" can do to reduce climate change back on Earth Day 2006. Here's what we wrote then:

7. Buy Local. According to Yahoo!, produce grown in the U.S. travels 1500 miles, on average, to reach your grocery store. Yahoo! goes on to say that you can "save on fuel by buying from local growers," or by creating "your own community garden." This suggestion shows why Yahoo!'s climate change reducing suggestion Number 2 doesn't compute. Even if it travels 1500 miles, produce travels by the foodstuff equivalent of public transportation. Replacing this transportation with the thousands of trips that the fellow members of your community would need to make to support local growers really doesn't make a whole bunch of sense - especially when you multiply those thousands by thousands of communities. Plus, you need to consider that all of you are getting city mileage instead of eco-friendly highway mileage! Unless, that is, you're driving that hybrid from suggestion Number 4....

Will buying local reduce climate change? No. At least, not in any measurable way.

As it happens, David Foster did the math and put numbers to our observations about the efficiency of foodstuff transportation. (HT: Newmark's Door, William Polley, voluntaryXchange, Marginal Revolution.) What's more, he's created a brand new measure of the relative fuel efficiency of various means of transporting food, the Tangerines per Gallon parameter, which states how many tangerines can be transported for each gallon of fuel consumed for the sake of bringing them to market by the modes of shipping used.

If you're a regular reader of Political Calculations, you already know where we're headed with this! The tool below will find out how many Tangerines per Gallon, or for that matter, Items per Gallon, each method of transport can deliver to you either separately or in combination. What's more, we'll also find out how much fuel per tangerine is consumed by the transportation process, as well as how much it costs, both total and per tangerine!

In the tool above, the Cargo Ton Miles per Gallon represents the combination of cargo that can be carried and distance that can be traveled for each gallon of fuel consumed for each transport method, with the default values being the back-of-the-envelope estimates provided by David Foster.

Using the default values, we find that shipping tangerines by rail cross-country from Florida to North Carolina, including transport by truck to and from the railheads, gets about 300 cargo ton miles to the gallon, burning 3.0 gallons of fuel at a total cost of $8.64. That works out to 2666.7 tangerines per gallon, or 0.000375 gallons of fuel per tangerine, which adds some $0.003240 to the cost of each.

Now, if we say that the tangerines are grown locally in a greenhouse and that the farmer transports them to a farmer's market near the Edwards' palatial estate by a 20 mile-per-gallon pickup truck, covering a total distance of 60 miles to and from the market, we find that we get the exact same figures we did by shipping 900 miles by the combination of rail and tractor-trailer.

And if we have just 3 people in the Edwards' community bypass the farmer's market to buy direct from the grower by traveling to the tangerine greenhouse in their eco-friendly, fuel-efficient, 60 mile-per-gallon-getting hybrid cars, covering 60 miles each (or 180 miles total), we find that they burn exactly the same amount of fuel as does shipping the tangerines by rail and truck 900 miles from Florida!

The latter analysis also assumes that our three hybrid drivers are hauling off roughly 889 tangerines each. If they buy and transport any less than that, they're really screwing over the Earth.

Do environmentalists who encourage people to only "buy local," and the politicians who pander to them, really care about the environment? Even a little?