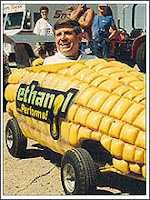 Over at Marginal Revolution, Tyler Cowen was shocked (no pun intended, although we'll be focusing on corn-based ethanol in this post) at the potential this and other alternative biofuels have as described in an article in the FT by Ricardo Haussman. While Haussman is optimistic for a biofuel-driven future enabled by new technological advances in producing the stuff, we wondered how we might get there sooner.

Among the alternative liquid fuels, ethanol has potential, but not the way we do it here in the U.S. today with corn. By contrast, Brazil has developed its ethanol production capability using sugar from sugar cane, which yields far more energy per input than what can be achieved by using corn:

While corn ethanol's energy ratio hovers around breakeven, "we get eight units of ethanol for every one unit of fossil fuel," says Isaias Macedo, one of Brazil's leading sugarcane researchers. Experts estimate that producing and burning cane ethanol generates anywhere from 55 to 90 percent less carbon dioxide than gasoline. And Macedo envisions even greater efficiencies. "We can do the same thing with two-thirds or half of the bagasse, better manage tractors in the field, and approach levels of 12 or 13."

In our view, if the U.S. government was really serious about developing ethanol and getting it into widespread distribution faster, rather than redistributing massive numbers of tax dollars to support Big Corn farm and ethanol production subsidies ahead of a presidential election year, it would be better to reduce the tariffs on importing sugar into the U.S. instead. Doing so would maximize the economic benefit to the U.S. while minimizing the impact to the companies behind the US' Big Sugar lobby.

Here's how that would work. Instead of making everything made with corn more expensive (tortillas, beef, etc.) by sucking so much of it off to produce ethanol, the U.S. could have used the ethanol production demand to keep the price of sugar up within the U.S., keeping those prices stable, while also not impacting the cost of so many other foods.

Including those foods (like beer) that don't even have corn products as part of their ingredients, and which are on their way to becoming more expensive because land previously used to produce their ingredient crops (like hops) is being used to grow corn instead.

It's not like the U.S. doesn't have the room to maneuver here. Thanks to its sugar tariffs, U.S. consumers pay twice the world price for it. Why not take the opportunity to develop a broader supply of useful fuels *and* promote freer trade?

National Geographic: Green Dreams - one of the best general overviews we've seen discussing the potential and challenges facing ethanol and other biofuels.