Something is definitely up with the latest estimate of 2007's third quarter GDP that was released earlier today. In our view, either the news is fantastic and the three months of July, August and September in 2007 were way better than we had ever previously considered or there's a serious anomaly in the underlying data.

First, let's look at our GDP bullet charts, which show the most recent estimates of one-quarter and two-quarter annualized growth rates for inflation-adjusted GDP against the finalized data for the two previous quarters and the historic backdrop of GDP growth since 1980 (via the "temperature" scale): 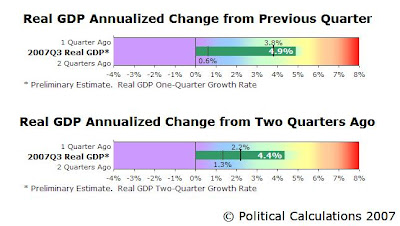 Unquestionably, the most recent estimates look very good in comparison to the historic data. But here's the thing - we had previously estimated that the third quarter's data would come in at an inflation-adjusted level of 11,583.3 billion (constant 2000 USD). This figure is consistent with a two-quarter annualized growth rate of 3.0% and was estimated using the "modified limo" approach described in this post, which also shows the method's increasingly successful track record. At the time we made this calculation, this predicted growth rate was at the very high end of what was being forecast for the U.S. economy.

Today's inflation-adjusted GDP figure for the third quarter of 2007 came in at 11,653.3 billion in constant year 2000 US dollars, some $70 billion ahead of what we had originally thought was a realistic, but somewhat optimistic forecast. That's a very significant margin above and beyond what we have seen as being the typical error range for the modified limo method for quarterly GDP data going all the way back to 1948.

So much so that we're left wondering if something is up with the underlying data behind the GDP figures released today. And there's a case that can be made for that as Barry Ritholtz has already done (in referring to 2007Q3's estimated one-quarter annualized GDP growth rate of 4.9% below):

This 4.9% number is one of the more "fanciful" government releases you will see in your lifetime, (outside of the state run media that exist only within totalitarian dictatorships).

To begin with, we know that the Q3 prices saw significant increases, yet the price index deflator was a 9 year record low of 0.9%. Rex Nutting observed: "Because of the way in the price index is constructed, it likely understates real-world inflation, and thus overstates real growth."

Residential fixed investment, the GDP component that includes spending on housing, plunged by 19.7% in the third quarter (but Investments in structures increased 14.3%).

We have seen consumer spending falter, with the crucial opening salvo of the holiday weekend down 3.5%. That's no surprise, given that second-quarter wages were revised lower by $44.8 billion. As a result, real disposable incomes fell 0.8% in the second quarter, instead of rising 0.6% as the Commerce Department had previously reported.

Question: How can Q3 GDP be 4.9% with corporate earnings, housing and retail sales so awful? Forget Goldilocks, this fairy tale sounds more like Cinderella . . .

Keeping in mind that we're considerably more optimistic about the health of the U.S. economy than Barry is, our new best guess is that this figure will eventually be revised downward, substantially, as the adjustment for inflation in the third quarter of 2007 is itself adjusted as the true inflation picture is filled in.

Unfortunately, it may be months or years before we find out if we were right all along....