Earlier this year, we speculated that with the rate of growth of the U.S.' exports to China consistently growing faster than the rate of China's exports to the United States, we might see the U.S. trade "deficit" with China peak and begin declining.

Since that time, that trend in the relative growth rates of each nation's exports to the other has continued: 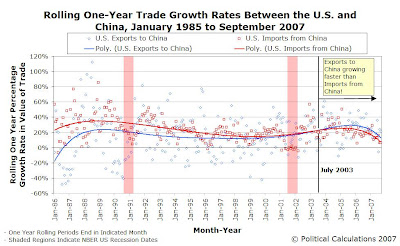 And the value of goods and services the U.S. exports to China now appears to have fully doubled for the second time since January 2001: 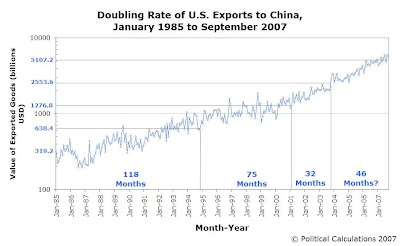 Looking specifically at the U.S.' trade balance with China, it appears very possible that the so-called U.S. trade "deficit" with China may not pass its previous peak of $24.4 billion USD that it reached in October 2006: 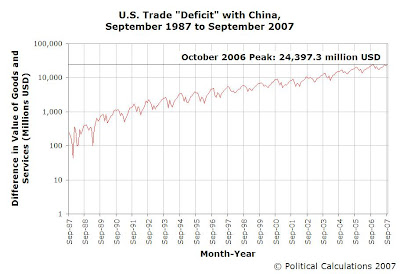 We think this situation is very possible for two main reasons:

We'll know for sure if this is the case on December 12, 2007, when the U.S. Census Bureau releases the U.S.' trade data for the month of October 2007. As October typically represents the annual peak of China's exports to the U.S., coming ahead of the Christmas shopping season, the data will decide if the so-called U.S. trade deficit has pretty much well peaked for the foreseeable future!