If you're looking to analyze the fundamental performance of a company's business, one of the key pieces of data you'll consider are the company's earnings, or rather, the amount of profits a company generates during a specific period of time.

The problem with all this arises when you consider all the different ways that companies have of presenting their earnings. As Investopedia Advisor Ben McClure noted:

... numbers in earnings reports mean pretty much what company accountants want them to mean, neither more nor less.

The issue for us came up several months ago when we first presented the following chart, which shows the one-year trailing Price-Earnings Ratio (P/E Ratio) for the S&P 500 since January 1871: 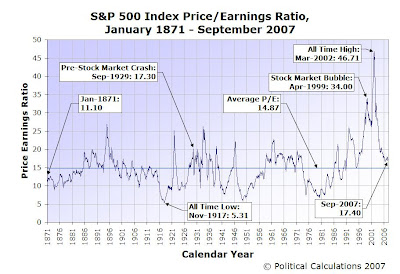 As it happens, the primary reason we use reported earnings per share data for our S&P 500 database and performance calculating tool is because we only have this data for the entire historical series we maintain going back to January 1871. We don't have operating earnings data going back anywhere near this far, so we're more or less locked into using the S&P 500's reported EPS figures.

But the argument is a good one. When you're considering a company's earnings, or comparing one company with another, how can you do so in the most apples-to-apples way possible?

Here's how Ben McClure described the problems investors have come to have with the traditional ways in which companies report whether they're making or losing money:

Investors have lost faith in the three major categories of earnings: reported earnings, operating earnings and pro forma earnings. We've seen in the past that the traditional measure, the GAAP-based reported earnings, leaves companies with plenty of room for creative accounting and manipulation.

Operating earnings, which leaves out one-time gains and expenses from the bottom line, is meant to make the numbers comparable across companies. Unfortunately, many Wall Street analysts now have their own criteria for what should be excluded, so analyzing and comparing companies using operating earnings can be awfully difficult. Meanwhile, the definition of pro-forma earnings - which treats significant corporate transactions "as if" they never occurred - has become so broad that it can hide almost anything from investors.

Standard & Poor (S&P) has been working on this issue and now provides a new metric called core earnings. For S&P, this revised measurement of company earnings:

... excludes any gains related to pension activities, net revenues from the sale of assets, impairment of goodwill charges, prior-year charge and provision reversals, and settlements related to litigation or insurance claims. Expenses related to employee stock option grants, pensions, restructuring of present operations or any merger and acquisition costs, R&D purchases, write-downs of depreciable or amortizable operating assets, and unrealized gains/losses from hedging activities are all included in the core earnings.

Unfortunately, S&P has only been developing their core earnings measure for just a few years, which means that we'll have to stick to using reported earnings for our entire historic database of S&P 500 data.

Another Measure of Earnings

It does occur to us that there might be another highly useful way to measure the relative value of the S&P 500 index over our entire series of data, using yet another form of company earnings: dividends!

As defined by Investopedia, dividends are:

A distribution of a portion of a company's earnings, decided by the board of directors, to a class of its shareholders. The dividend is most often quoted in terms of the dollar amount each share receives (dividends per share).

Dividends provide an extremely useful means by which to benchmark a company's or a stock index' performance for the following reasons:

In the days ahead, we'll develop a dividend-based benchmark against which an investor can determine whether or not the S&P 500 if appropriately priced!

A look at the history of dividends for the S&P 500.