Right on schedule, the Bureau of Labor Statistics has released the Consumer Price Index numbers for January 2008 today, which means that we've officially updated our signature tool The S&P 500 at Your Fingertips with all the data you need to find the rates of return that you might have received from investing in the S&P 500 between any two months since January 1871!

But that's yesterday's news! If you're like us, you want the picture of what's going on right now. Or even tomorrow! And since we only recently figured out that our view of the future was flawed, we've been working to capture the full picture that we should have been using in the first place.

In doing that, we've projected a new future for where corporate dividends are expected to go and, to avoid the situation that we found ourselves in where we didn't catch on for several weeks that we were missing important parts of our data, we're opening our books to you to show how we did it. After all, what's a blogosphere for if not to provide very smart people with the opportunity to point out where the problems in your analysis might be?

Our next step is to take this growth rate and apply it to each of the year-over-year dividends per share for each quarter of 2007 to get the corresponding value for 2008. Our intermediate results are presented in the table below:

The next step is to fill in the months in between these quarterly figures, for which we'll use the same linear interpolation method utilized by Robert Shiller for his S&P 500 data. The table below summarizes our projected dividends per share results for 2008:

So that's how we determine the dividends per share data that we use in our tool. We expect that we'll need to revise these figures in the future, which we'll do in the course of our regular monthly updates, preferably when S&P releases the actual dividends paid for each of the quarters that we've projected or perhaps if they revise their annual projection for the S&P 500's dividends per share.

We use a similar technique for the earnings per share data but here, S&P provides quarterly projections of the earnings data so we only need to perform the linear interpolation step to get the values for each month.

And now, finally, what you've been waiting for, we'll combine the average monthly index value of the S&P 500 with our anticipated dividend per share data to produce the picture of where the S&P 500 is today! 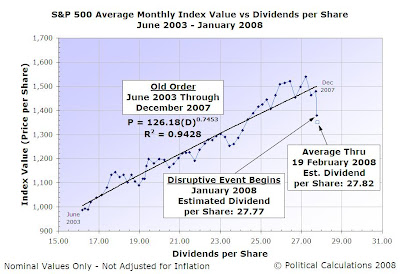 It really is that easy, and anyone with a little bit of math know-how can do it!