Political Calculations
Unexpectedly Intriguing!
February 25, 2008
The US' National Income and Debt, Since 1791

Every now and again, we go back to data we've featured previously just for the purpose of playing around with how to visualize it. Today, we're featuring a new look at the United States' national income (as measured by non-inflation adjusted GDP) and national debt from 1791 through 2007!

First, here's a standard look at the US' Nominal GDP and National Debt, using a standard scale: The problem with the chart above is that given the exponential growth of both national income and debt, it really is only capable of showing how the two change with respect to one another in the most recent years. It's a picture that washes out what the data really looks like for pretty much everything older than thirty years.

So now, here's the exact same data, but this time, presented on a logarithmic scale, which we think does a better job at capturing how both national income and debt has changed in each year since 1791: 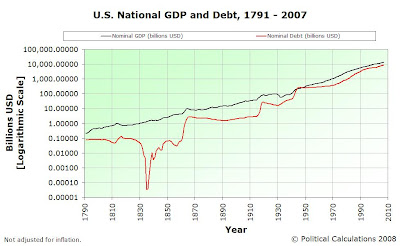 Now, you've got to admit, that's a lot cooler!

The bulk of historic data is taken from Louis D. Johnston's and Samuel H. Williamson's Measuring Worth site, which had previously been hosted by EH.net.

Straight from the U.S. Treasury!