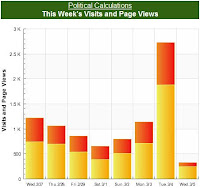 Every now and again, Political Calculations' sitemeter starts spinning really fast for no immediately obvious reason. Sure, we'd like to think it's because we've just posted something that's really engaging that makes for compelling reading, but more often than not, it often turns out that something we wrote as a offhand post months ago has just been picked up by a bigger blogger or other online publisher.

You don't have to take our word for it. The image we've included with this posts shows our site visits and page views for the past week. You can see the activity above and beyond our usual level for Tuesday, 4 March 2008. As a side note, over the past three months, we've averaged between 5-600 unique visits and just under 1000 page views per day, so that's the frame of reference from which to measure (the dip you see in our weekend traffic is a usual feature - we generally only post new material on Mondays through Fridays.)

So you can see that on Tuesday, something was up! As it happens, our What Are the Chances Your Marriage Will Last? tool, part of our Geek Logik series of posts highlighting the tongue-in-cheek mathematical approach to life of Geek Logik author Garth Sundem, was prominently featured as a simple link at James Altucher's Blog Watch at TheStreet.com. That single link accounted for more than 40-50% of our traffic yesterday!

Now, get this! James Altucher also featured a second link from our site, one more keeping with the investor-oriented theme one would expect from posts at TheStreet.com - a look at the five worst bear markets of all time. Exactly the kind of thing that investors concerned about the economy might be interested in, or so you would think. That link maybe accounted for 5-10% of our traffic yesterday - so, by what we're conservatively estimating at roughly a five-to-one margin, TheStreet.com's readers are more interested by the potential state of their relationship than the state of the stock market!

Today is already shaping up to be pretty interesting too. The Consumerist has linked to a data post of ours from January 2007 looking at the lowest paying jobs in the U.S. and what they pay per hour! As of this hour (roughly 5:00 AM), it's dominating our site visits!

All we can say is "Thank you!" And if you're new around these parts, go ahead and knock around a bit. You never know what hidden gem we might have secretly placed just for you!