Want to see where Social Security's taxable income cap fits in with household income percentiles over time? We probably should have shown this chart with our post from yesterday discussing how to minimize risk in funding Social Security, but better late than never! The heavy black line in the chart below shows where Social Security's contribution and benefit base would fall, in constant inflation-adjusted 1982-84 U.S. dollars, from 1986 through 2005: 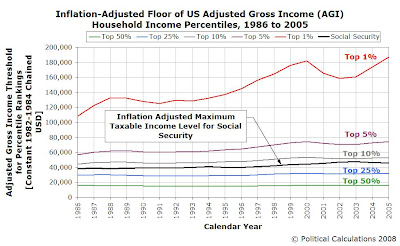 Note that the Social Security taxable income cap lags changes in household adjusted gross income by about a year, which is what you would expect since it's set after the National Average Wage Index is determined for the previous year!

And while we're at it, here's the same chart, but now with the household income data converted to be in constant, inflation-adjusted 2008 U.S. dollars: 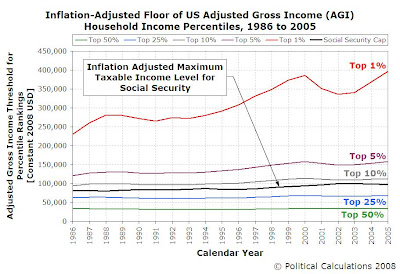 For reference, the floor defining the level of income needed to be part of the Top 50% of household incomes in the U.S. is $33,537 for 2005, up 0.2% from the figure of $33,483 for 1986, which underscores our main point of how stable incomes at lower levels are over time, which helps protect Social Security's ability to deliver its benefits at promised levels.