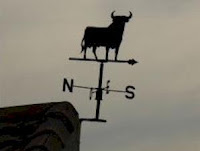 Will Franklin finds the political climate being faced by the Republican Party this year to be, in a word, terrible.

But how bad is it really? To quantify the odds, Will turned to the Electoral Barometer, which was recently featured in an article by Alan Abromowitz at Larry Sabato's Crystal Ball '08.

The Electoral Barometer is a mathematical formula that features the things we need to stand back and objectively account for two key factors when looking at the U.S. presidential campaign: the popularity of the incumbent, as measured by their Net Approval Rating (the spread between the President's favorable and unfavorable job approval rating) and the strength of the economy, as measured by the annualized real (inflation-adjusted) growth rate of GDP.

The default data in the tool is current as of 17 June 2008. As such, the GDP data is that for the most current revision of the first quarter of 2008.

Now, here's the thing. The data that drives this math changes frequently, so you'll definitely want to check back often as the political weather changes!