Just because we can, we thought it might be fun to take a look at how much finished oil products are supplied to people in the United States every day. The following chart shows what we found when we took the U.S. Energy Information Agency's figures for the average number of thousands of barrels of Finished Petroleum Products Supplied to the U.S. per day, converted those figures to the equivalent number of U.S. gallons, then divided that result by the number of people within the United States, as measured by the U.S. Census' Resident Population Estimate for each month from January 1982 through March 2008 (we found that data in two places - here it is for between April 1980 through November 2000, and for April 2000 through the present): 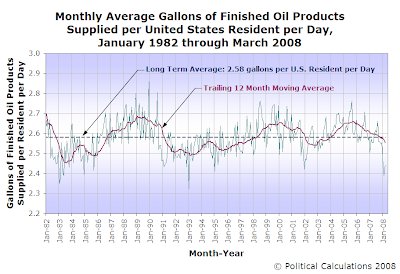 Finished petroleum products include things like gasoline, heating oil, plastics, etc. Basically everything that can be made from a barrel of crude oil.

We can easily see that the amount of finished petroleum products has held fairly constant over the past 26 years, with people within the United States consuming an average of 2.58 gallons per day, plus or minus 0.13 gallons per day (as mapped out by the high and low extremes of the trailing 12-month moving average).

In simpler words, we confirm that individual Americans are not consuming an ever-increasing amount of oil. We can therefore eliminate increased U.S. consumption of petroleum-based products as a significant contributor to the recent spike in the world price of oil, which has increased from $52.11 per barrel to $102.03 per barrel in the time from February 2, 2007 through March 2008, the last month covered in the currently available data for average daily oil consumption. As we see in the chart above, the amount of finished petroleum products consumed by U.S. residents started at 2.572 gallons per day in February 2007 and peaked at 2.661 gallons per day in August 2007 before plunging to 2.443 gallons per day in March 2008.

There are people who may want to blame the current world price of oil on the collective buying habits and lifestyles of American consumers, but this is one dog that just won't hunt! You can safely rest assured that anyone who does so is just looking for an excuse to screw the American consumer over for their own personal benefit.