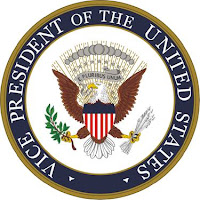 There's a lot of speculation surrounding who's going to be each U.S. presidential candidate's pick to be Vice President this year, but it's time to end all that speculation and simply announce that apparently, it's me.

If you're surprised to hear that, just think how surprising being asked to be Vice President is! The phone rings, an operator says to hold for the candidate, then suddenly they're desperately pleading with you to go on the bottom half of their ticket.

But the real truth is that nobody votes for Vice President. In fact, one strongly suspects that most Americans may not even know the name of the current Vice President. Or any Vice President. Heck, I'll even go one step further - it's pretty likely that a sizable percentage of Americans don't even realize that there really is such a thing as a Vice President. "Don't be silly," the parents who fall in this group tell their children, "the Vice President is like the Easter Bunny. No one ever sees them, except maybe once every four years."

As a result, it would seem that an anonymous individual like myself is well-positioned to fill the role. Being outside the political world, I don't have any real baggage that could be a drag on the ticket. The FBI's detailed background search and vetting process took all of about five minutes. They use Google. If that's good enough for them, it ought to be good enough for all you registered or likely voters! Try that with former Vice Presidential candidate John Edwards these days.

In my view, the Vice President of the United States should be virtually invisible. You shouldn't even know they're there. And of course, the best way to do that is to fill the job with an anonymous presence like myself. Stuff like taking up official residence at an undisclosed location poses absolutely no challenge. In fact, the Secret Service's job of protecting the Vice President would get a lot easier just because I could be anyone. Terrorists, political assassins, telemarketers - all of them would be absolutely stymied simply because they wouldn't know who to go after!

What's more, I'm experienced at being an anonymous presence. The next President of the United States of America won't have to worry about any of that "look at me, I really exist" crap that sabotages the true mystique of the Vice Presidency and eventually drags down the ambitions of so many previous Vice Presidents. Don't believe me? Look at the post-Vice Presidential careers of the people who have previously either held the job or actively campaigned for it. Believe me when I say that nothing good has come from any of it and the previous job holders and applicants can be safely ignored!

The way I see it, if you're destined for obscurity, why not start off with it and keep it that way?

So I'm pleased to accept the invitation to be the next Vice President of the United States of America. Just don't ask me to carry a swing state.

Obama said he wants a VP who is "not about ego, self-aggrandizement, getting their name in the press."

Check, check and check!... And on the latter, I couldn't be more off the press' radar if I tried! Plus, what better way to divert attention away from one's lack of experience than to pick a running mate who's very existence is an open question?