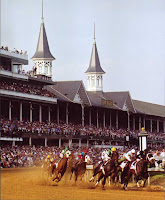 Big Brown, the horse that dominated the 2008 Kentucky Derby and the 2008 Preakness Stakes before being blown away by the field at the 2008 Belmont Stakes in a devastating loss, is racing again.

The question is why.

The Rail's Alex Brown explains why continuing to race Big Brown doesn't make economic sense back on 20 May 2008, before Big Brown's blowup:

Big Brown is off to Three Chimneys with a $50 million valuation.

Let us explore the economics of the deal. Investors and breeders want a decent return on their investment in four years, before the progeny of the stallion starts to run. Once the progeny starts running, the value of the stallion is tied to its record as a producer. Before they run, the value is dictated by the economy and the initial deal. Getting the majority of the money back before the progeny starts running limits the risks associated with standing a stallion whose runners may not be too fast.

Assume Big Brown stands for $100,000 and covers 112 mares a year. The latter number is conservative. I chose it because that is the number the Three Chimney’s stallion Smarty Jones covered in 2006. In 2007, Stormy Atlantic led the way with the most mares covered in the northern hemisphere, with 199. Johannesburg covered 195. Johannesburg also covered 139 mares in the southern hemisphere, for a total of 334 in one year. So the numbers can go much higher.

Based on Smarty Jones’s numbers of 2006, each year Big Brown will earn $100,000 x 112, $11.2 million. In four years, he will have earned $44.8 million before his progeny starts running. With interest, he will then need to earn perhaps another $15 million or so through his stallion career to make the $50 million valuation appropriate for all involved. Of course, I use the numbers loosely, but they are a close approximation and illustrate the reality of breeding economics.

From an investment standpoint — and Big Brown’s owners are investors — to keep Big Brown in racing beyond his 3-year-old career, he would need to earn more than $11.2 million a year plus the additional costs of insurance as a racehorse versus insurance as a stallion. Obviously the economic decision has to be to retire Big Brown.

Meanwhile, Big Brown's owners were stating at the time that they would indeed race Big Brown after the Belmont, as The Rail's Joe Drape reported, also back on 20 May 2008:

Rick Dutrow says he’d like to see Big Brown race beyond the Belmont and in the Travers Stakes, or the Midsummer Derby, and the Breeders’ Cup Classic, where the reigning Horse of the Year Curlin could await.

While the colt's co-owner, Michael Iavarone, has said Big Brown will not race next year, he has indicated that the colt may run in the summer and the fall. Iavarone’s International Equine Acquisitions Holdings struck a deal for Big Brown's stallion rights for more than $50 million with Three Chimneys Farm in Midway, Ky.

"We have the right to race him through the end of the year and make decisions as he goes," Iavarone told the Thoroughbred Times.

"As far as Big Brown is concerned, as long as he keeps coming out of his races well, we'll sit down and discuss each race with Three Chimneys on a race-by-race basis. We don’t intend to race him after he's 3."

Now consider the races being discussed for Big Brown instead of these large purse races:

Dutrow wouldn't commit to where Big Brown will make his next start -- assuming he isn't retired. The Pennsylvania Derby, Mass Handicap and Jockey Club Gold Cup have been mentioned as possibilities."

The takeaway is that it would appear that Big Brown's owners don't have anywhere near the confidence they had prior to the Belmont Stakes. Otherwise, why not pursue bigger purses in bigger races? 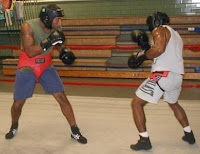 From our standpoint, it would seem that Big Brown's owners may be pursuing a strategy similar to one used by boxing champions who are past their prime. Here, after climbing to the top ranks of the profession, a top boxer's manager seeks to pit his fighter against much lesser opponents, seeking to guarantee a continued winning streak rather than face a potentially equal or better competitor, who might jeopardize the boxer's status and income-earning potential as a top draw.

By following this strategy, the boxer's manager seeks to maximize the amount of revenue that might be gained before the boxer's career inevitably declines.

For racehorses, the situation is somewhat different. Most of the money that stands to be gained from their racing prowess comes after their racing days are past and they are put out for stud. So what possible reason could there be for extending Big Brown's racing career by matching the thoroughbred up against the horse racing world's equivalent of a bunch of palookas?

The answer lies in Big Brown's extremely poor performance at the Belmont Stakes. Already committed to a $50 million USD stallion career, Big Brown's last place finish at Belmont very likely seriously damaged the horse's stud income-earning potential. As a result, it may be that the only way Big Brown's owners have of generating this level of income within the available window of time is to incrementally build up the Big Brown's winning record as a way to increase their stud fees.

The strategy may only produce a marginal improvement in those stud fees, but multiplied by hundreds of mares, the strategy makes sense. They stand make more money by adopting it than they might without it.

And in the world of horseconomics, that would appear to mean racing palookas.