Political Calculations
Unexpectedly Intriguing!
10 November 2008
The Masked Magician and All the Marbles

Have you ever seen those television shows with the Masked Magician? The ones where he reveals the secrets of how magicians saw people in half, levitate or make elephants appear in the middle of an empty parking lot?

We have to count those shows as one of our guilty pleasures. In fact, it's such a guilty pleasure that we're going to feature the Masked Magician performing, then explaining, how to do a trick he's never done on TV!

We'll begin with the Masked Magician's audience, a thousand people, who each choose a colored marble. All of the marbles are the same size and weight and texture - the only difference between them is their color. There are ten different colors from which the audience members can each choose: red, blue, green, yellow, white, black, orange, violet, tan and pink. They inspect them all, then each choose their favorite color. 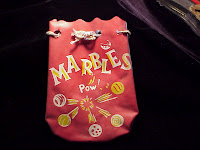 It's sad that the audience members have rejected the white, black, tan or pink marbles. Perhaps they believe those colors just aren't very exciting.

His assistants blindfold him. The Masked Magician rolls up his sleeve and shows his bare arm to everyone in the audience.

He then reaches into the magical marble bag with his bare hand and removes a single blue marble.

The audience is unimpressed. Surely there's something more to this trick.

He reaches in again, and pulls another blue marble from the bag. And then another. The audience begins to shift uncomfortably in their seats. Where's the magic?

But the Masked Magician continues. One at a time, he reaches in and pulls out a blue marble. After 10, some in the audience are yawning, but some are just getting interested. How is that possible, they wonder? He should have pulled at least one other-than-blue colored marble out of his magical marble bag by now.

Most of the audience now understands why this trick never made it onto one of his television specials. But some in the audience are truly amazed - there's just no way that someone could pull that many blue marbles in a row out of that bag at random! There's an almost equal number of red ones, and almost one out of seven in the bag are green! Sure, you can understand maybe not seeing the yellow, orange or violet marbles, but shouldn't you have seen a lot of red marbles or at least one green one by now?

What are the odds of that?

What Are the Odds of That?

How amazing is the Masked Magician's ability to only pull blue marbles from his magical marble bag filled with hundreds of marbles of different colors? You can calculate the odds yourself with our tool below:

If you play with the numbers, the more he only pulls marbles of the same color from the bag, the ever more unlikely it is that he should be able to do it! Clearly, you should never let the Masked Magician near the ballot box during a recount! 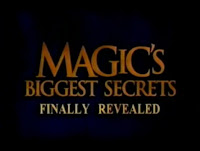 The secret is in the bag. Literally.

Hidden within the bag are hidden pockets, sewn into its padded lining. Fans of the show will know he has his suits made with similar features.

But here, long before the first audience member has even begun inspecting the different colored marbles, the Masked Magician has stashed blue marbles into the concealed pockets that are sewn into the bag's lining. Lots of them.

And then it's just a simple matter of appearing defying the odds to keep pulling marbles of the same color out of the bag.

But the odds would only matter if the selection of marbles from the bag were truly random and fair. And as we all know, the Masked Magician is neither random nor fair when it comes to producing an ever more unlikely outcome. The fix was in from the beginning.

There's something potentially just as unlikely happening now in Minnesota, where a U.S. Senate seat is on the line. The table below shows the original tally of that race (as best as we could find in news articles from 5 November 2008), along with the current tally of the mandatory recount that is now underway, as of Sunday, 9 November 2008.

As we were unable to find the correct vote tallies for the minor candidates in the original tally (indicated in the table above with an asterisk "*"), we've assumed that the current vote tally is the same in calculating the total number of ballots cast in that election.

But to really get good use out of our tool above, it would be best to know the vote counts recorded at the polling place or precinct level. If say 32 uncounted ballots were to turn up in the trunk of the car of a poll worker, you could find out just how unlikely it would be that all of those ballots would be for just one candidate out of all the votes recorded for their polling place.

If so, in the worst case of vote fraud, an extremely unlikely probability would suggest that these ballots favoring one candidate were either pre-positioned before election day to be used in case of a close election or are the remaining evidence of vote suppression, where 32 real ballots are all that remain of a group of roughly 76 ballots, where some 44 legitimately cast for other candidates have been destroyed and never added to their totals (assuming the same proportion of ballots cast per candidate as tallied statewide.) An alternative explanation is that it could be evidence of extreme incompetence on the part of the individual poll worker, their co-workers and those to whom they report.

Finally, here is our table presenting the odds of unlikely events, which have been extracted from Gregory Baer's Life: The Odds and How to Improve Them,

so you can judge for yourself how likely it is that the U.S. Senate race recount totals are changing as they would appear to be changing in Minnesota:

How likely is it that votes previously counted for one candidate are now being counted for another?