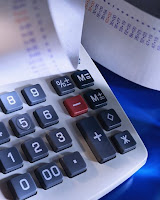 Here at Political Calculations, we're perhaps best known for the tools we've developed to solve problems related to investing, personal finance, health matters, business, politics, finance, economics and of course, awkward situations. But more than that, we're connoisseurs of online tools. We seek out and review the tools at other sites, looking to identify the best (what we would award our top honor, the Gold Standard) among the good (which earn our Silver Standard) and the outright awful (an online tool that actually "Makes You Stupider").

Today, we're going to feature a tool that satisfies our Silver Standard, which was developed by Rob Bennett of PassionSaving.com with John Walter Russell of Early-Retirement-Planning-Insights.com, The Stock-Return Predictor.

The Stock-Return Predictor is based on historical stock return data for the S&P 500, using John Walter Russell's regression analysis of data that considers the impact of stock valuations upon their long-term return. Stock valuations for this tool are based on a variation of the traditional Price Earnings Ratio (P/E Ratio) that was developed by John Campbell and Robert Shiller, in which earnings data over a 10-year period is adjusted for inflation and averaged over that time. This is more accurately called the P/E10 ratio.

Who Is the Tool Aimed At? 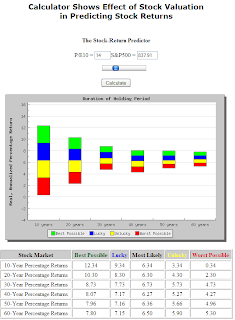 The tool features two methods of entering data: a text input field for P/E10 data and a slider control. Once a given P/E10 ratio has been set, the user just needs to click the "Calculate" button to generate results. In this case, the results are an expected valuation for the S&P 500 index, as well as a graphical display that quickly communicates the best, worst, lucky, unlucky and likely outcomes!

In that respect, this tool is very similar to our "Lemony Snicket" tools, which considers the absolute best, absolute worst and absolutely average investing scenarios based on our own analysis of the performance of the S&P 500 over the index' entire history.

What makes Rob's tool different is that it incorporates the effects of the market's valuation as measured by the P/E10 ratio. Here, it accounts for the most likely outcomes for an investment that is made when this valuation is high (greaater than 20, for example) or low (in single digits). It then graphically depicts the range of recorded returns graphically for certain periods of time, beginning with a 10-year return and increasing in 10-year increments to reach 60 years.

For making an investment decision, a user would enter the most recent P/E10 ratio and find the corresponding historical rates of return. Based on those results, a user could recognize their potential level of risk in making a long-term investment, and adjust the amount of their stock market investment accordingly.

Perhaps the biggest complaints we have regarding the tool fall into the design category. The tool has very much of a 1990's vibe going on in its design, with its use of primary web-safe colors and HTML tables, which give it a very dated look.

Those complaints out of the way, we really like the slider control as a way of quickly changing the input values for the tool. Better still, we can override the slider and directly enter a value for the P/E10 ratio.

Not so great, but less important, is that we cannot enter a value for the S&P 500 index to reverse calculate a corresponding P/E10 ratio. This however is not a problem of the tool, so much as it's a problem of where the S&P 500 index value text field is placed. Located above the "Calculate" button, we would anticipate that this would be an input text field. The easiest way to resolve this potential confusion for users would be to relocate it so that it appears below the button.

While not cutting-edge where stock market theory is concerned (that's our bailiwick!), The Stock-Return Predictor will provide a reasonably good rule-of-thumb for informing a potential user's stock market investing decisions. The tool provides a neat approach for delivering high quality information to the tool's intended audience. What's more, we really like the valuation-based approach since this helps communicate some of the risk that an investor may be taking on when making a new investment.

The user-interface could use some serious refreshing, but overall, we find this tool satisfies our requirements for earning our Silver Standard. It's informative, it's based on solid data and it provides useful results.

Update (12 February 2009): Via e-mail, Rob Bennett clarifies that John Walter Russell's role in developing the tool went beyond the regression analysis forms the basis on which the tool works! We've modified the review above accordingly to recognize his role in jointly creating the Stock Market Predictor tool.