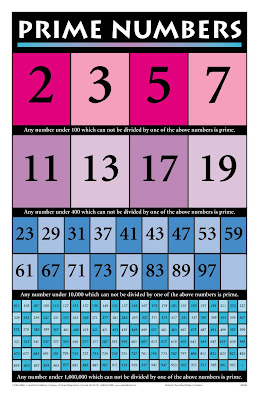 Do you remember prime numbers? Those natural numbers that can only be wholly divided by themselves and one?

Once you leave your school days behind, odds are that the only time you ever hear about prime numbers comes on those slow news days when it turns out that some mathematicians at some university have just confirmed that some gigantic number is a prime number, usually using really powerful computers. If you ever dig into the stories, you almost invariably find out that these numbers are what are called Mersenne primes, which are based on the following premise:

What that doesn't tell you though is anything about how prime numbers are distributed. There are lots of prime numbers that are not Mersenne primes, so if you just go by that relationship, the chances are that you've passed over a lot of prime numbers. Here's what Wikipedia has to say on the matter:

Mathematicians have tried in vain to this day to discover some order in the sequence of prime numbers, and we have reason to believe that it is a mystery into which the mind will never penetrate.

In a 1975 lecture, Don Zagier commented

There are two facts about the distribution of prime numbers of which I hope to convince you so overwhelmingly that they will be permanently engraved in your hearts. The first is that, despite their simple definition and role as the building blocks of the natural numbers, the prime numbers grow like weeds among the natural numbers, seeming to obey no other law than that of chance, and nobody can predict where the next one will sprout. The second fact is even more astonishing, for it states just the opposite: that the prime numbers exhibit stunning regularity, that there are laws governing their behavior, and that they obey these laws with almost military precision. 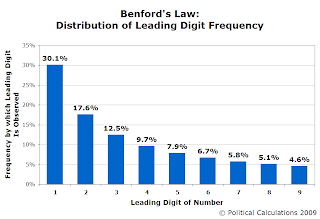 That's why the findings of a new study by Bartolo Luque and Lucas Lacasa are especially interesting. The two Spanish mathematicians discovered that the frequency by which the leading digit of prime numbers would appear to be governed by a generalized version of Benford's Law.

That's important because Benford's Law can describe the frequency by which leading digits appear in sets of data where exponential growth is observed - so much so that deviations from Benford's distribution may be taken as evidence that non-natural forces are at play. A good example of that may be found in accounting, where auditors can use the relationship described by Benford's Law to uncover potential fraud.

The set of all primes - like the set of all integers - is infinite. From a statistical point of view, one difficulty in this kind of analysis is deciding how to choose at "random" in an infinite data set. So a finite interval must be chosen, even if it is not possible to do so completely randomly in a way that satisfies the laws of probability. To overcome this point, the researchers decided to chose several intervals of the shape [1, 10d]; for example, 1-100,000 for d = 5, etc. In these sets, all first digits are equally probable a priori. So if a pattern emerges in the first digit of primes in a set, it would reveal something about first digit distribution of primes, if only within that set.

That's important since knowledge of how prime numbers are distributed could lead to the more rapid discovery of non-Mersenne prime numbers, in much the same way as knowing how gravity affects planets led astronomers to the discovery of the planet Neptune: by reducing the potential number of places in the sky at which telescopes could be pointed to actually see it. Identifying as yet unknown prime numbers would, in turn, lead to improved encryption methods, which underlie the security of modern banking transactions and electronic communication.