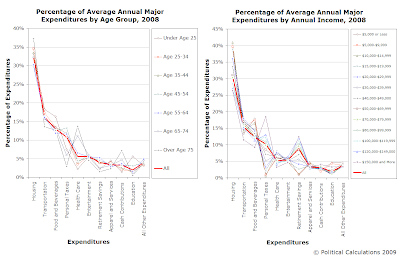 How much money does the average American earning $40,000 a year spend on housing-related expenses? What percentage of the total spending of a typical 58 year old American goes to buy food and alcoholic beverages? And how much does the average American consumer unit (the personable phrase the data jocks at the BLS use to describe the people who spend money in the U.S.) put toward their retirement savings?

Even though the government collects all this data each year in the Consumer Expenditure Survey (CES), the answers to these questions aren't necessarily easy to extract. The government sorts the individuals and households who make up the so-called consumer units by what age range they fall into, or by what income range they earn, or by education level or a whole bunch of other basic categories, but they don't narrow the data down enough to isolate the people between Age 25 and 34 who earn between $30,000 and $39,000 before taxes, for example. Instead, we get a picture that includes everyone who falls in a given age range or whose annual income falls inside a given range, and that's as close as we can get from the data that's made freely available.

Until now. We've mined the Consumer Expenditure Survey and identified the kinds of spending that are driven by income and that are driven by age. We did this by first identifying where we saw the widest spreads in the datapoints for either income or age-based variation in the CES, and then by using the data regression tools at Zunzun to create a mathematical model for each major expenditure item.

We've put the outcome of our analysis at your fingertips in the tool below, in which you can simply enter the age of the "reference person" (another BLS term of endearment) and their annual before-tax income to calculate how much such an individual spends on any of the major expenditure categories we've listed. We'll also determine what percentage of the total spending that each category represents.

Each of the categories listed above correspond to the top line data for each presented in the 2008 CES data tables from which we obtained the data used in our regression analysis, except as follows:

What can you do with this information? Well, if you were ever curious to see how your consumer unit's spending compares to that of the average American consumer unit, at least of similar age and income, our tool's output will show you what that average level of spending is!