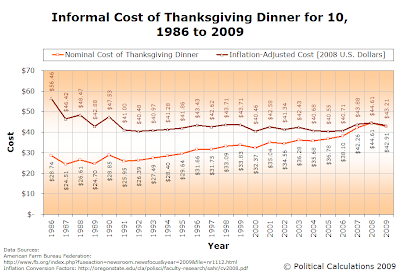 The American Farm Bureau Federation has their own Thanksgiving tradition each year: the advocacy group informally prices out the cost of a traditional Thanksgiving dinner with all the trimmings, adding up the cost of the turkey, stuffing, sweet potatoes, rolls with butter, peas, cranberries, vegetables, pumpkin pie and beverages that would be enough to feed 10 people on the holiday. They've been doing this exercise regularly since 1986 and their data spanning from then through 2009 is presented in our first chart, along with our own calculation of that cost adjusted for inflation.

"Food prices rode the energy price roller coaster up during the first half of 2008, and as the year winds down, energy prices have moderated somewhat but food prices have not come down," said Jim Sartwelle, an AFBF economist.

For 2009, the AFBF is reporting that assembling their classic Thanksgiving dinner costs 4% less than in 2008:

AFBF's 24th annual informal price survey of classic items found on the Thanksgiving Day dinner table indicates the average cost of this year's feast for 10 is $42.91, a $1.70 price decrease from last year’s average of $44.61.

Milk, at $2.86 per gallon, dropped $.92 and was the largest contributor to the overall decrease in the cost of the 2009 Thanksgiving dinner.

"Consistent with the retail food price declines seen throughout the year, consumers will pay just a bit less for their Thanksgiving feast this year," said Jim Sartwelle, an AFBF economist. "Consumers are benefiting at the grocery store from significantly lower energy prices and the effects of the economic slowdown. Again this year, the cost per person for this special meal is less than a typical 'value meal' at a fast-food outlet," Sartwelle said.

So we find that even though the price of Thanksgiving dinner has decreased, the price of turkey would appear to not really have budged much from its 2008 price.

To put that price in context for recent years, we next turned to the Bureau of Labor Statistics, who also has an annual tradition of tracking the average price of a whole, frozen turkey in U.S. cities. Our next chart shows their data from January 2004 through September 2009.

What we see in this chart is that the average price of turkey has been really elevated for much of 2009, as compared to the prices recorded each month from 2004 through 2008. In fact, comparing the average price for 2008 of $1.25 per pound with the average price of whole, frozen turkeys from January through September 2009 of $1.40 per pound, we see that prices have risen in value by 11.8%.

The question is why?

We wonder if perhaps turkey has become one of those commodities like gold or stocks that have increased in relative value as the U.S. dollar has fallen in value.

That's less than the 11.8% increase in price we've calculated for whole, frozen turkeys for the period from January 2008 through September 2009, which is really impressive considering that gold is now near its highest values for the year.

So we find that turkeys have outperformed gold as an investment over much of the past year. Who would have ever thought such a thing was possible?!