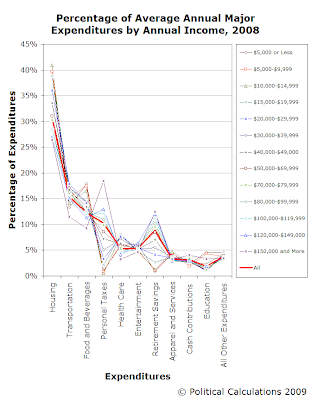 Having looked at age-driven spending in the United States, we'll next plunge into the BLS' Consumer Expenditure Survey data for 2008 to see how income affects how much and on what people buy!

As with our chart showing similar categorical expenditure percentages by age group, the key to understanding the significance of income is measured by the spread in the data points for each category and their order.

Here, we find that income is a major driver of Housing, Food and Beverage consumption, Personal Taxes, and Retirement Savings, given the wide spreads the data points in each category and the order we observe for each, either running from low to high income (as as we see for Personal Taxes and Retirement Savings) or from high to low income (as we see for Housing and Food and Beverages.)

We see that income is a weaker driver of Transportation and Health Care expenditures and most remarkably, we see that income has very little effect upon the percentage of American consumers' budgets covering Entertainment, Apparel and Services, Cash Contributions, Education and All Other Expenditures. Or rather, these things may be found simply as a straight percentage of income, regardless of income level.

Descriptions of these different kinds of expenditures are provided by the BLS.