Just for fun, we took the data from the dynamic table of the individual states of the United States versus European Union nations that we posted yesterday, uploaded it to ManyEyes, then used the visualization tools at that site to create maps showing the relative size of the Gross Domestic Product per capita of each, adjusted for Purchasing Power Parity, for each region.

We next scaled the map of the E.U. to be in the same scale with respect to that measure of the map we produced for the United States, plus or minus a pixel or so, to produce the combined side-by-side map below. (And before anyone says anything, yes, it's not to geographic scale - think of it instead as being kind of a cartogram....)

All just to better visualize the relative level of living standards between individual U.S. states and E.U. nations! 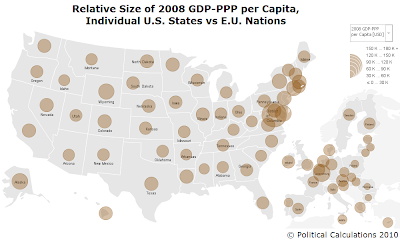 Since we posted the data publicly on ManyEyes, it's available for you to create your own visualizations. If you do, please drop us a line and we'll be happy to feature your work here!