The Kauffman Foundation has released its findings from its survey of economics bloggers on their outlook for the U.S. economy as of the first quarter of 2010.

While the most remarkable finding so far is the extreme disapproval of the performance of the current U.S. Congress, especially as compared to other organizations and institutions that affect the economy, we dug a bit deeper into the survey to see why that might be the case.

Here are the results of two survey questions that really stood out to us: 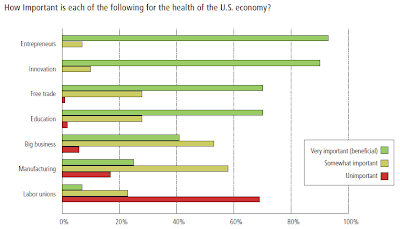 The results for this first question, "How important is each of the following (Entrepreneurs, Innovation, Free Trade, Education, Big Business, Manufacturing, Labor Unions) for the health of the U.S. economy?", might just as easily be a list of what the primary priorities have been for the U.S. Congress and U.S. President have been for the past year, with the length of the red bars indicating "Unimportant" correlating with the groups who represent the biggest beneficiaries of the economic policies being issued from Washington D.C.

The next chart indicates where economics bloggers believe that attention should be, ranking the policy choices the U.S. Congress should pursue, based upon their ability to effective reduce the government's budget deficits: 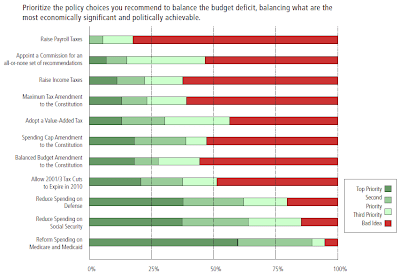 And here, once again, the red bars indicating "Bad Idea" represent most of what the U.S. President and members of Congress have proposed for dealing with soaring deficits. (Note: The proposed health care reforms passed by each of the House and Senate in 2009, but not yet combined into a single piece of legislation passed by both bodies of Congress, do not seriously address Medicare and Medicaid spending levels - what changes in spending that these reform bills contain are counteracted by other pieces of legislation also presently working their way through the Congress.)