In 2008, Arizona became the first state in the U.S. to implement photo speed enforcement, where high speed cameras are used to photograph both the driver and license plates of vehicles exceeding posted speed limits on the state's roads.

The way the system works, the photos of speeding vehicles are examined by the contractor who operates the photo radar system to determine if the images are clear enough for an identification of both driver and vehicle to be made. If so, a notice of violation is mailed to the vehicle's registered owner, requesting that they waive their rights to contest the violation and pay a fine of $181.50.

That number is important, because that $181.50 becomes the prize in an unusual kind of lottery for drivers who decline to waive their rights. 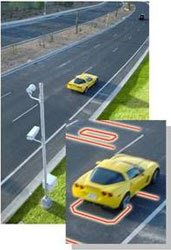 The "lottery" works because if a month passes after the notice is mailed to the vehicle owner, who then declines to waive their rights and pay the $181.50 fine, the state's law requires that they be officially served notice of the violation in person. If they are not notified within 120 days of the issuance of the original notice, the speeding ticket, and the liability for paying the fine associated with it, goes away. Entirely.

If however they are served notice, then in addition to the fine of $181.50, they are also responsible for paying administration fees of $25.00 on top of it.

That $25.00 then is the cost of choosing to play what we'll call the Arizona State Photo Radar Lottery.

Here's what makes the lottery possible. There are so many potential photo speed enforcement violations being processed in the state at any given time that a good portion of those who have been mailed a notice of violation are never served notice in person within the period of time the state's law requires.

The Phoenix New Times reports that the odds of not being served notice in person are about 1 in 4.

To find out, we've modified our tool for determining when it might make sense to buy a regular lottery ticket, and entered the relevant numbers into it. As with all our tools, you're welcome to change the values to run whatever scenario you wish. For the Arizona State Photo Enforcement Lottery however, we'll have more comments below the tool....

Using the default data for Arizona, we see that with a 1 in 4 chance of not being served in person should the registered vehicle owner choose to ignore the original notice of speeding violation, it makes more sense for them to risk the $25.00 additional fee to gain the chance of not having to pay $181.50. We find that with the same odds, the fine would have to be less than $100 for it to be more worthwhile to simply pay the fine.

We infer from this finding that the state of Arizona got greedy when setting the amount of the fine for photo speed enforcement.

It then comes as almost no surprise to find that Arizona drivers have largely chosen to ignore mailed notices of violation for speeding. As of June 2009, just 24% of drivers in the state who had been mailed such notices had paid them, down from the figure of 38% from when the system first went into operation in October 2008.

From a public policy perspective, if Arizona chooses to continue operating its system of photo enforcement, we find that it either needs to lower the fine for speeding below $100 or lower the odds of "winning" by increasing the number of people served in person.

Alternatively, the state could increase the amount of fees it charges to serve potential violators in person. We note however that this latter change would carry with it the unintended consequence of effectively increasing the amount of the "prize" to be won by ignoring the mailed notices of violation.

Unless and until such changes are made, we should expect that Arizona drivers will continue to choose to play the state's unofficial lottery.