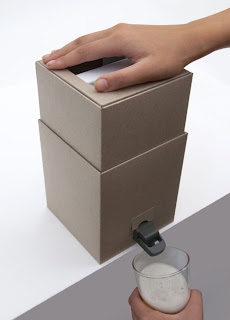 Recently, home brewer and economist Phil Miller considered the very basic reasons why his fellow craft brewers had chosen bottles over cans in marketing their beverages.

In a nutshell, the technology for canning craft brews was prohibitively expensive given the small size of the production batches involved. It has only been recently that canning technology has become inexpensive enough to support craft brewers putting their products into cans.

But that development may have come too late! Australian designer Tom Hussey has developed an environmentally-friendly and relatively inexpensive packaging solution for beer: the Kegless box!

Brand X Daily reports on the development and its potential for revolutionizing how high quality craft beers might be shipped, marketed and consumed (HT: Core77):

With a two-pronged focus on cost and environmental impact, Hussey's invention eschews pricier bottles, kegs and cans in favor of a revolutionary collapsible container that maintains the CO2 pressure while barring oxygen. And it's turned heads. Hussey is one of 14 finalists in the student category of the 2010 Australian Design Award and the Australian component of the James Dyson Award who will advance to the global competition.

"I wanted to reduce the environmental effects, but also reduce cost and provide a marketing benefit," says Hussey, who has already received interest from one of Australia's major beer producers. "It's all very well to come out with a product that has less environmental impact, but people need to want to buy it."

Chances are that won't be a problem. Who can argue with a well-balanced beer that maintains quality and freshness for up to a month, but is also easy on the planet?

If it turns out to be less expensive than the alternatives for producers and can also support high quality for consumers while achieving its ambitious environmentally-friendly goals, who would argue with better indeed?