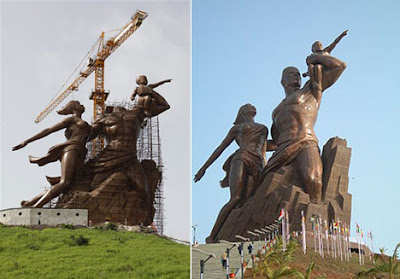 Other than weapons, that is!

Like the Statue of Liberty in the United States, tourists can go up to the top (inside the man's head) and view the surroundings.

In 2009, the Millennium Challenge Corporation (MCC) a U.S. government agency, agreed to provide $540 million to support infrastructure improvements within Senegal, such as roads and irrigation projects, over a period of five years. The $29 million North Korean-built statue, while not directly funded through the MCC grant, represents 5.3% of that total planned contribution.