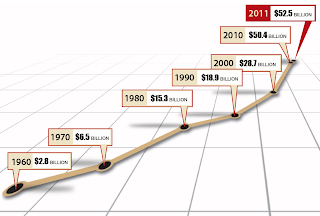 In May 2010, George Washington University and Washington University in St. Louis jointly issued a report on the growth of government spending allocated in the annual budget of the United States' federal government for the purpose of regulating social and economic activity in the nation. Written by Susan Dudley and Melinda Warren, the report primarily focuses its analysis on the U.S. budgets for fiscal years 2010 and 2011. However, we were really taken with the stylized graph presented on the report's cover page.

The data in the chart is taken from Table 1 of the report and has been adjusted for inflation, with the figures presented in terms of constant 2005 U.S. dollars. We wondered if we could take that data, do a bit of rough regression analysis, then build a tool to both estimate how much government regulation cost U.S. taxpayers between Fiscal Year 1960 and Fiscal Year 2011 and project how much it would be likely to grow into the future. 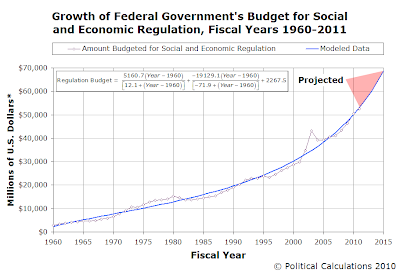 So we dug deeper into the report and extracted the inflation-adjusted data for each year from Fiscal Year 1960 through 2011, which we found in Table A-5 of the report. Our graph, shown to the left, reveals what we found for the total of social and economic regulation for these years, as well as presenting our mathematical model of the overall trend through these years.

What we find is that the cost of social and economic regulation in the United States, has been and is growing at an exponential rate.

The only exception to that pattern is represented by the short term spike in the cost of regulation in 2003, which coincides with the formation of the Transportation Security Agency and its bureaucracy following the September 11, 2001 terrorist attacks. The rate of growth of the cost of regulation has otherwise been consistently around the exponential rate of 5% per year.

But that's not accurate enough for us! We applied the data regression tools available at ZunZun to create the formula we presented in the chart above, so we can better project what the cost of social and economic regulation in the U.S. will be in the future, not to mention quickly estimating where it's been since 1960!

Going by our math, by the end of President Obama's first term in office in 2013, we could reasonably expect the cost of social and economic regulation to be on the order of 60 billion dollars. That's up from the $43.3 billion that regulation cost U.S. taxpayers in 2008.

And that's not even incorporating the cost of the President's health care reform law, which promises to add quite a lot of regulation to the bills that U.S. taxpayers must pay.

And that also doesn't take into account the cost that U.S. individuals and businesses have to pay to comply with U.S. regulations. That might take adding a few zeroes onto the numbers that the tool estimates!