We first calculated the average individual American's effective oil consumption per day back in June 2008. Today, in considering Barack Obama's first Oval Office address to the nation, in which he stated his desire for individual Americans to transition away from consuming so much oil, we thought we'd revisit and update the data to see if Americans have been or are as wasteful with oil resources as the President would appear to believe. 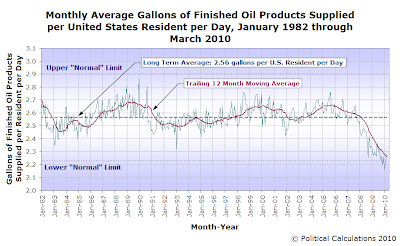 The chart to the right reveals what we found when we took the U.S. Energy Information Agency's figures for the average number of thousands of barrels of Finished Petroleum Products Supplied to the U.S. per day, converted those figures to the equivalent number of U.S. gallons, then divided that result by the number of people within the United States, as measured by the U.S. Census' Resident Population Estimate for each month from January 1982 through March 2010 (we found that data in two places - here it is for between April 1980 through November 2000, and for April 2000 through the present).

What we find is that since January 1982, the average daily oil consumption for individual Americans living in the United States has averaged 2.56 gallons per person. More remarkably, we see that Americans have dramatically reduced their consumption of oil and its derivative products since July 2007.

So dramatically, in fact, that Americans today are consuming roughly one-third of a gallon per person less than they did on average from January 1982 through November 2007, the last full month before the largest recession in the U.S. since World War II began. As of March 2010, Americans are consuming an average 2.28 gallons of oil per day.

That drop has occurred even as the resident population of the United States steadily increased throughout this period, which means that most of the decline may largely be attributed to falling aggregate economic productivity during these years.

What's more, when we calculate the standard deviation of the individual American's effective daily oil consumption and plot lines indicating the "statistically normal" limits within which we would expect to find any data point some 99.7% of the time, we confirm that the oil consumption of individual Americans has already broken below what would be considered normal in more healthy economic circumstances.

We should note that we've already identified a sharply falling demand for oil as being a key indicator of economic distress in the modern world.

We'll conclude by observing that Barack Obama would appear to already be getting his wish with respect to the oil consumption of Americans. Unfortunately for Americans desiring the return of a healthy economy, he would seem to not be satisfied with achieving his goals.

To generalize something we said before: "There are people who may want to blame anything bad having to do with oil on the collective buying habits and lifestyles of American consumers, but this is one dog that just won't hunt! You can safely rest assured that anyone who does so is just looking for an excuse to screw the American consumer over for their own personal benefit."