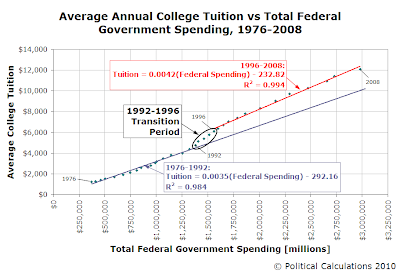 How much will the cost of tuition and required fees at a four-year college or university be next year on average? And how about four years from now when today's freshmen may be graduating?

For us, those are really easy questions to answer, because we discovered that the average annual cost of both tuition and required fees at a four-year college or university has come to move in almost perfect lockstep with the total amount of money the U.S. government spends each year.

And because it does, we can take the total federal spending projected by the White House in its most recent fiscal year budget proposal to anticipate what the average annual cost of college will be for each of the years the budget looks into the future.

That information is presented in Table 3.1 of the historical tables presented in the White House's latest budget document, which covers "Outlays by Superfunction and Function". What we're after are the figures for "Total Federal Outlays" for each year from now until 2013, which should cover everyone spanning from this year's seniors through this year's entering freshmen.

Below, we've presented the data we found for the total federal spending levels in the OMB's Fiscal Year 2011 budget for the each year from 2006 through 2013, along with what our tool (on the right) would project for each of those years based on the trend we observe running from 1996 to at least through 2008:

What we find is that if the relationship we found holds over these years, the average cost of tuition and required fees at a four-year higher education institution in the United States will be approximately 25% greater in 2013 than they were in 2008, the last year for which we have recorded data.

We would actually expect that tuition growth will fall below what our tool projects for 2009 through 2011, but will catch up to what it projects for 2012 and 2013. The reason why is because much of the growth in federal spending has been directed toward specific expenditure categories in recent years due to the financial crisis of 2008, so we should expect U.S. higher education institutions to resume pacing their "usual" share of federal spending as the spending associated with the 2008 crisis recedes with the passage of time.

Of course, there's always the chance that the cost of a college education may begin to be driven by factors other than what the total level spending by the federal government will be. But unless and until the current pattern breaks, you can reasonably expect that the average cost of college forecast by our tool will generally follow the pace set by the federal government's projected levels of future spending.