What if all it took to reduce the incidence of diabetes in America was to lower the relative price of low-carb food with respect to high-carb food for diabetic patients?

That question is relevant today because of the work of Chad Meyerhoefer of Lehigh University and Ephraim Leibtag of the USDA, who found that changes in the relative prices of low and high carbohydrate foods can affect the medical expenditures related to treating diabetes in a recent paper that appeared in the American Journal of Agricultural Economics (here's an ungated version of the paper.) Here's the abstract:

We investigate the impact of changes in the relative price of low- and high-carbohydrate foods on medical expenditures for diabetes care using Nielsen Homescan price data merged to the 2000-2005 Medical Expenditure Panel Survey. We find that an increase in low- (high-) carbohydrate food price increases (decreases) both the likelihood of a diabetes diagnosis and the level of medical expenditures among those with diabetes. We also find relatively small impacts of food prices on BMI that differ by gender. Policy simulations suggest subsidizing the low-carbohydrate food purchases of people with diabetes could result in significant reductions in health care costs.

Meyerhoefer's and Leibtag's public policy suggestion is significant in that it deviates from the "tax the 'bad' food or ban it" approach favored by many politicians, such as New York City Mayor Michael Bloomberg, who has famously pursued his obsession with using the power of government to control the personal consumption habits of others with both approaches for both soft drinks and trans-fats.

Of course, the difference in policy preferences might be explained by the fact that subsidizing food *costs* the government money while taxing it brings money into the government's coffers. The opportunity to create a regulatory structure and to staff it with the money from taxes is just an extra bonus for the power-hungry politician!

But then, doesn't the government use the money it spends to subsidize food production (and by extension, food prices) already? 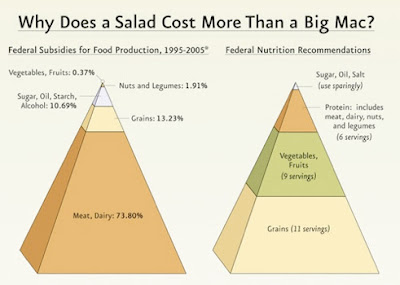 Why, yes it does! It turns out that after raising and collecting taxes and building up monumental bureaucracies, handing out subsidies to major campaign contributors vital industries is a real perk of political power.

And as it happens, a lot of those subsidies go to things that have really high levels of carbohydrates in them. Like corn and wheat to name two direct contributors, and also beef, which if we're being honest, is frequently complemented with high-carb foods, like the bun that comes with that hamburger!

Those subsidized crops then lower the cost of producing other food items made from them. Like the high fructose corn syrup that's used to sweeten so many different food products, like soft drinks. Or to name one product that incorporates both subsidized corn and wheat in its ingredient list, Twinkies®. Or one that incorporates corn syrup, wheat and beef: the Big Mac®.

Which are all pretty good examples of the kinds of high-carb foods that people being treated for diabetes should probably avoid eating on a frequent basis. And according to Meyerhoefer and Leibtag, things they probably would avoid eating so often if their cost to consumers weren't so much lower with respect to the costs of low-carb foods.

So their solution, subsidizing the low-carb foods that could counteract the lower costs that high-carb foods enjoy due to their own government subsidies would seem to be an ideal solution for the massive health problem being aggravated by the government's existing food subsidies in the first place!

But don't tell the politicians that's what's going on. Otherwise, they might catch on and achieve much, if not all of the same effect by slashing the existing food subsidies to zero and using the tax money that would otherwise go to this national health hazard to do something like pay down the national debt instead. All while improving the health and reducing the medical expenditures of millions of Americans by making the relative cost of low-carb foods become lower with respect to today's highly subsidized, high-carb foods.

Update: Yes, we're aware that beef isn't a carbohydrate - it's just best enjoyed when served along with them! In any case, we've made the appropriate corrections in the post above!...